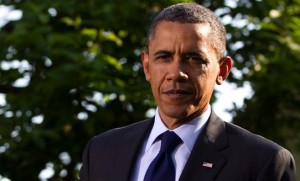 Last month, Mitt Romney got the fundraising edge over Barack Obama, raising roughly $17 million more than the president. According to Reuters, in the 24 hours following the Supreme Court’s decision to uphold the Affordable Care Act, Romney’s campaign raised $4.6 million. So it’s perhaps no surprise that a new report by The Daily Beast says Obama made an “anxious conference call” asking donors who gave his 2008 campaign the maximum donation to do so again this year.

Lloyd Grove obtained the audio of a call Obama made to donors from Air Force One last on Friday night. Listening to the 18-minute fundraising pitch, Grove writes that the president is “pleading” and “sound[ing] like a dog-tired idealist forced to grapple painfully with hard reality.” In the call, Obama warned donors about the imbalance in campaign funds as a result of Super PAC donations to the Romney campaign.

“I’m asking you to meet or exceed what you did in 2008… Because we’re going to have to deal with these super PACs in a serious way. And if we don’t, frankly I think the political [scene] is going to be changed permanently. Because the special interests that are financing my opponent’s campaign are just going to consolidate themselves. They’re gonna run Congress and the White House.”

But despite the money disparity, the president stated that his campaign doesn’t need to exactly match Romney in fundraising because “we’ve got a better grassroots operation and… a better message.” Obama even went so far as to cite the recent recall battle in Wisconsin and actually called out the Koch brothers by name in the conference call.

Obama made the stakes incredibly clear, stating plainly that “if things continue as they have so far, I’ll be the first sitting president in modern history to be outspent in his reelection campaign.”