President Obama: Bain Attacks ‘Not A Distraction,’ They’re ‘What This Campaign Will Be About’ 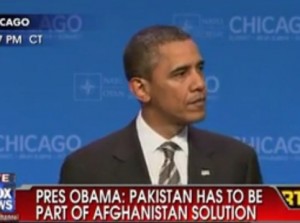 During a press conference at the NATO Summit in Chicago, President Obama was asked about the hot political story of the day, Newark Mayor Cory Booker‘s criticism (and walkback) of the Obama campaign’s focus on Mitt Romney‘s record at Bain Capital. The President said he thought Booker was “an outstanding mayor,” and pushed back on the Romney campaign’s claim that the Bain attacks are a “distraction.”

Bloomberg News’ Hans Nichols asked the President one of his patented three-part questions. “Yesterday, your friend and ally Cory Booker said that an ad your campaign released was ‘nauseating,’ and it alleged that Romney at Bain Capital was, quote, ‘responsible for job losses’ at a Kansas City steel mill,” Hans said. “Is that your view, that Romney is personally responsible for those job losses, and will comments from Booker and your former auto czar Steve Rattner cause you to pull back a little bit? And generally, can you give us your sense — three-part, Mr. President. Could you give us your sense of just what private equity’s role is in stemming job losses as they seek a return on investment for their investors?”

The President began by saying “First of all, I think Cory Booker is an outstanding mayor. He’s obviously helping to turn that city around.”

He then took a direct shot at the Romney campaign’s response. “I think it’s important to recognize that this issue is not a, quote, ‘distraction.’ This is part of the debate that we’re going to be having in this election campaign, about how do we create an economy where everybody, from top to bottom, folks on Wall Street and folks on Main Street, have a shot at success.”

The President explained that maximizing profits is a healthy part of free enterprise, but isn’t always good for everyone. “That’s part of the role of a lot of business people. That’s not unique to private equity, and… There are times where they identify the capacity for the economy to create new jobs or new industries. But understand that their priority is to maximize profits, and that’s not always going to be good for communities or businesses or workers.”

The President said Romney’s record at Bain is relevant “because my opponent, Governor Romney, his main calling card for why he thinks he should be president is his business experience. He’s not going out there touting his experience in Massachusetts. He’s saying, I’m a business guy and I know how to fix it,’ and this is his business.”

“When you’re president,” he continued, “as opposed to the head of a private equity firm, then your job is not simply to maximize profits. Your job is to figure out how everybody in the country has a fair shot. Your job is to think about those workers who get laid off, and how are we paying them for their retraining?”

He went on to list other divergent priorities, then said “If your main argument for how to grow the economy is, ‘I knew how to make a lot of money for investors,’ then you’re missing what this job is about. It doesn’t — it doesn’t mean you weren’t good at private equity, but that’s not what my job is as President. My job is to take into account everybody, not just some.”

President Obama again signaled that this won’t be the last we hear about Bain. “This is not a distraction. This is what this campaign is going to be about.”

As for his campaign’s focus on Romney’s Bain record, the President said “Mr. romney is responsible for the proposals he’s putting forward for how he says he’s going to fix the economy, and if the main basis for him suggesting he can do a better job is his track record as the head of a private equity firm, then both the upsides and the downsides are worth examining.

The Booker kerfuffle has been unhelpful so far, at least from a process standpoint, but as the week progresses, time will tell if the media (and/or voters) will focus on the Obama campaign’s difficulty in controlling its surrogates (especially after the Biden gay marriage fiasco), or on Romney’s claim that his experience at Bain qualifies him to be president. The heat from the Booker flap could end up working to the President’s advantage if he can harness it to showcase his campaign’s strategy.