President Obama: Be A Dick About It, Why Don’t You 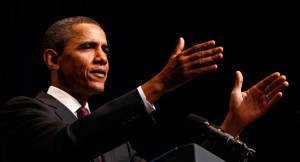 Lost in the din surrounding Mark Halperin‘s suspension from MSNBC over his remark that President Obama was “kind of a dick” during his Wednesday press conference is the fact that, Halperin’s intentions aside, the crack was not necessarily an insult. Liberals everywhere will point out that Republicans are the biggest bunch of dicks since the director’s cut of Boogie Nights, and have been waiting for the President to deliver some Dirk Diggler in return.

President Obama has long been known for his York Peppermint Patty-cool temperament, a trait that both sides pretty much agree on. It serves him well at times, like the run-up to the 2008 election, but when it comes to fighting back against Republicans, the President’s supporters are more than a little weary of Professor Highroad McCompromise. Halperin’s remark is just the latest example of how the President’s even keel can sometimes be a liability.

The only thing more comical than the attacks that have been leveled at Barack Obama by Republicans is the way everyone gets the vapors as soon as his heart rate gets above 80. Was it kind of a dick move to compare congressional Republicans (unfavorably) to ‘tweenage girls? Maybe, but it was awesome. After years of Republicans calling him everything from a mau-mau to just plain Mao, and rejecting their own ideas as soon as the President signs on to them, and heckling him during a joint session of Congress, this hardly seems to indicate that Mr. Obama needs to “take a Valium and calm down.”

Every time President Obama displays even the slightest deviation from Vulcan form, the media take their cues from Republicans, and freak out. While candidates like John Kerry were gulled into keeping all of their anger confined to the pillows they shouted into, and all of their messaging “positive” (and ineefectual), President Obama is just naturally calm, reasonable, and not nearly dickish enough.

Unfortunately, the highlights of the Obama presidency, at least for this liberal, all have significant doses of phallitude™ in common. Perhaps the best example of this was President Obama’s visit to the Republican House Issues Conference in 2010.

The thing you have to understand is that these weren’t just any Republicans, they were House Republicans. The House of Representatives, regardless of party, is like that crazy girl you could barely keep up with before you settled down and got married to the Senate. It wasn’t just the lion’s den, it was the lion’s den, living room and kitchen.

For over an hour, the President fielded the very worst the Republicans could muster, and he kicked ass. By the time it was over, he had taken their best talking points and left them shredded on the floor. While it didn’t necessarily convert his detractors, the President’s performance left no doubt as to who was and was not serious about solving the country’s problems. If you were a Republican, this was a dick move that rivaled spring cleaning day at the John Holmes Museum.

Then, there was his complete decimation of the Birthers, and Donald Trump, with the longest rope-a-dope in history. After years of letting the Birthers punch themselves out, and marrying many mainstream Republicans to the cause in the process, years of keeping that long-form birth certificate locked up like the contents of the briefcase in Pulp Fiction, all of a sudden, BAM!

He produces the long-form on the eve of the White House Correspondents Dinner, delivers a withering routine at the dinner that almost made me feel sorry for Trump, all while having just pushed the button on the operation to kill Osama bin Laden. There was only one way Republicans could respond, at least inwardly:

There have been many moments during the Obama presidency that have been more significant than these, of course, but have had their aura of triumph marred in one way or another. The passage of health care reform, for example, was marked by the ditching of the public option, and while the squeaker of a finish was amazing, it was only necessitated by a grisly Democratic failure in the Massachusetts Senate special election.

Whatever you think about deficit reduction, the full faith and credit of the US government shouldn’t be permitted to be held hostage, even to good ideas, let alone bad ones. The American people are fed up with all of this talk about shared sacrifice, because we’ve already eaten more than our fair share of sacrifice. The public is overwhelmingly certain of where that sacrifice should come from. So, Mr. President, please, do be a dick about it.