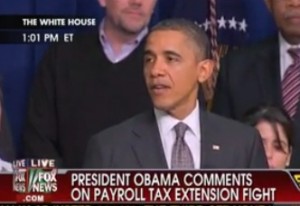 President Obama turned up the heat on House Speaker John Boehner in the battle over extending the payroll tax cut Thursday afternoon, delivering yet another set of remarks aimed at shaming the House into passing a compromise deal that the Senate has already overwhelmingly approved. This time, the President used the fruits of the #40Dollars social media campaign to bombard the House GOP with the tales of sacrifice that Americans have shared over the loss of $40 in their paychecks.

For weeks, President Obama has been calling Republicans out for their double-talk on tax cuts. When Republicans wouldn’t agree to a one-year extension of the tax cut, the Senate reached a bipartisan deal that extended it for two months, preventing a tax hike, while allowing both sides time to negotiate a longer extension. On Tuesday, House Republicans rejected the deal, demanding a conference committee with the Senate to negotiate a yearlong extension.

President Obama called them out Tuesday, and launched a social media campaign aimed at having Americans share what $40 a paycheck (the amount that most people will see their taxes go up by if the extension isn’t passed) means to them. In remarks Thursday afternoon, the President related some of those stories, and again called on the House to pass the two month extension, and negotiate a longer deal once Congress returns.

Speaker Boehner is facing blistering criticism from nearly every quarter. After hits from conservative media powerhouses like Charles Krauthammer and The Wall Street Journal, even Senate Minority Leader Mitch McConnell, who negotiated the two-month compromise with Senate Majority Leader Harry Reid, is speaking out to urge Boehner to pass the bill. At this point, the question isn’t if the House will pass the extension, but when, and how many more devastating speechlets like this will they let President Obama make?

Here are the President’s remarks, via Fox News:

ON THE PAYROLL TAX CUT

THE PRESIDENT: Thank you, everybody. (Applause.) Please have a seat. Good afternoon to all of you. Merry Christmas. Happy holidays.

We’ve been doing everything we can over the last few weeks to make sure that 160 million working Americans aren’t hit with a holiday tax increase on January 1st. We’ve also been doing everything we can to make sure that millions of people who are out there looking for work in a very tough environment don’t start losing their unemployment insurance on January 1st.

Now, if you’re a family making about $50,000 a year, this is a tax cut that amounts to about $1,000 a year. That’s about 40 bucks out of every paycheck. It may be that there’s some folks in the House who refuse to vote for this compromise because they don’t think that 40 bucks is a lot of money. But anyone who knows what it’s like to stretch a budget knows that at the end of the week, or the end of the month, $40 can make all the difference in the world.

And that’s why we thought we’d bring your voices into this debate. So many of these debates in Washington end up being portrayed as which party is winning, which party is losing. But what we have to remind ourselves of is this is about people. This is about the American people and whether they win. It’s not about a contest between politicians.

So on Tuesday, we asked folks to tell us what would it be like to lose $40 out of your paycheck every week. And I have to tell you that the response has been overwhelming. We haven’t seen anything like this before. Over 30,000 people have written in so far — as many as 2,000 every hour. We’re still hearing from folks — and I want to encourage everybody who’s been paying attention to this to keep sending your stories to WhiteHouse.gov and share them on Twitter and share them on Facebook.

The responses we’ve gotten so far have come from Americans of all ages and Americans of all backgrounds, from every corner of the country. Some of the folks who responded are on stage with me here today, and they should remind every single member of Congress what’s at stake in this debate. Let me just give you a few samples.

Joseph from New Jersey talked about how he would have to sacrifice the occasional pizza night with his daughters. He said — and I’m quoting — “My 16-year-old twins will be out of the house soon. I’ll miss this.”

Richard from Rhode Island wrote to tell us that having an extra $40 in his check buys enough heating oil to keep his family warm for three nights. In his words — I’m quoting — “If someone doesn’t think that 12 gallons of heating oil is important, I invite them to spend three nights in an unheated home. Or you can believe me when I say that it makes a difference.”

Pete from Wisconsin told us about driving more than 200 miles each week to keep his father-in-law company in a nursing home — $40 out of his paycheck would mean he’d only be able to make three trips instead of four.

We heard from a teacher named Claire from here in D.C. who goes to the thrift store every week and uses her own money to buy pencils and books for her fourth grade class. Once in a while she splurges on science or art supplies. Losing $40, she says, would mean she couldn’t do that anymore.

For others, $40 means dinner out with a child who’s home for Christmas, a new pair of shoes, a tank of gas, a charitable donation. These are the things at stake for millions of Americans. They matter to people. A lot.

And keep in mind that those are just the individual stories. That doesn’t account for the overall impact that a failure to extend the payroll tax cut and a failure to extend unemployment insurance would have on the economy as a whole. We’ve seen the economy do better over the last couple of months, but there’s still a lot of sources of uncertainty out there — what’s going on in Europe, what’s going on around the world. And so this is insurance to make sure that our recovery continues.

So it’s time for the House to listen to the voices who are up here, the voices all across the country, and reconsider. What’s happening right now is exactly why people just get so frustrated with Washington. This is it; this is exactly why people get so frustrated with Washington. This isn’t a typical Democratic-versus-Republican issue. This is an issue where an overwhelming number of people in both parties agree. How can we not get that done? I mean, has this place become so dysfunctional that even when people agree to things we can’t do it? (Applause.) It doesn’t make any sense.

So, enough is enough. The people standing with me today can’t afford any more games. They can’t afford to lose $1,000 because of some ridiculous Washington standoff. The House needs to pass a short-term version of this compromise, and then we should negotiate an agreement as quickly as possible to extend the payroll tax cut and unemployment insurance for the rest of 2012. It’s the right thing to do for the economy, and it’s, most importantly, the right thing to do for American families all across the country.

This is not just my view. Just a few hours ago, this is exactly what the Republican Leader of the Senate said we should do. Democrats agree with the Republican Leader of the Senate. We should go ahead and get this done. This should not be hard. We all agree it should happen. I believe it’s going to happen sooner or later. Why not make it sooner, rather than later? Let’s give the American people — the people who sent us here — the kind of leadership they deserve.

Thank you, everybody. (Applause.)