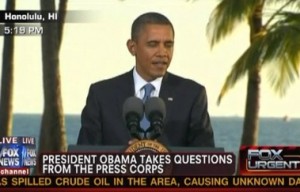 At Saturday night’s Republican presidential debate on national security and foreign policy, co-frontrunner Mitt Romney and others harshly criticized President Obama‘s efforts to prevent Iran from gaining a nuclear weapon, based on a recent International Atomic Energy Agency (IAEA) report. At a press conference in Hawaii Sunday evening, President Obama brushed off the “shocking” criticism, and saying that anyone who oversimplifies the issue “is either politicking, or doesn’t know what they’re talking about.”

CBS News’ Norah O’Donnell asked the President, Sunday night, about Mott Romney’s criticism specifically, beginning, “the Republicans did have a debate on CBS last night.  A lot of it was about foreign policy, and they were very critical of your record…”

“That’s shocking,” the President interjected, amid laughs from reporters.

“So if I could get you to respond to something that Mitt Romney said,” O’Donnell continued. “He said your biggest foreign policy failure is Iran.  He said that if you are reelected Iran will have a nuclear weapon.  Is Mitt Romney wrong?”

The President began by saying, “I am going to make a practice of not commenting on whatever is said in Republican debates until they’ve got an actual nominee,” before explaining the importance of building international opposition to a nuclear Iran. “you take a look at what we’ve been able to accomplish in mobilizing the world community against Iran over the last three years,” the President said, “and it shows steady, determined, firm progress in isolating the Iranian regime, and sending a clear message that the world believes it would be dangerous for them to have a nuclear weapon.”

“Now, is this an easy issue?  No,” the President said. “Anybody who claims it is, is either politicking or doesn’t know what they’re talking about.”

Early on in Saturday night’s debate, candidates competed to see who could be the most alarmist in reacting to the IAEA report, with Mitt Romney the hands-down winner, telling the debate crowd, “if we reelect Barack Obama, Iran will have a nuclear weapon. And if we elect Mitt Romney, if you’d like me as the next president, they will not have a nuclear weapon.”

Former Sen. Rick Santorum (R-PA) earned a close silver by declaring that the US should bomb Iran’s nuclear facilities “before the next explosion we hear in Iran is a nuclear one, and then the world changes,” losing out only because his premise seems to be that Iran’s first order of business as a nuclear power will be to nuke themselves.

Rep. Ron Paul (R-TX) observed that his rivals’ panicky responses sounded an awful lot like the drumbeat that marched the US into the Iraq War, saying, “I’m afraid what’s going on right now is similar to the war propaganda that went on against Iraq.”

Much of the criticism seems to revolve around the amorphous use of the threat of military action, as if that threat isn’t already crystal clear in the minds of the Iranian regime. In responding to the criticisms, President Obama said, as he has many times in the years I’ve been covering him, that no options are off the table. While Romney posited the use of force as a last resort (where have we heard that before?), other candidates suggested more provocative actions.

One of the stranger criticisms came from Newt Gingrich, who called for “maximum covert operations– to block and disrupt the Iranian program– in– including– taking out their scientists, including breaking up their systems. All of it covertly, all of it deniable.”

He sounded a lot like a guy complaining that he couldn’t see the participants at the Ninja Parade (that’s the point: you’re not supposed to see them, they’re ninjas). Later in the debate, Rick Santorum, of all people, demonstrated a grasp of this fact, saying, “there have been scientists turning up dead in Russia and in Iran. There have been computer viruses. There have been problems at their facility. I hope that the United States has been involved with that. I hope that we have been doing everything we can covertly to make sure that that program doesn’t proceed forward.”