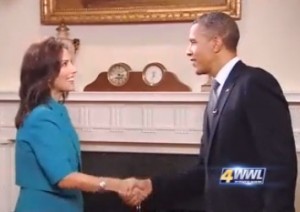 At the White House on Monday, President Obama did a round of interviews with local news anchors from 8 television markets around the country, including New Orleans’ WWL-TV. In a brief interview with anchor Karen Swensen, the President responded to a question about the recently-dormant issue of the Affordable Care Act’s preventive care mandate by telling Swensen that for “big Catholic hospitals or universities who employ a lot of non-Catholics” to deny contraceptive coverage is “not fair.”

The bulk of the President’s interviews were devoted to his renewed push to extend the Bush tax cuts for families earning $250,000 or less, and to addressing the effects of the impending Super Committee sequester on local military economies, but WWL’s Karen Swenson brought along some questions from her viewers, as well.

“(Viewer Michael Varino) describes himself as a Catholic voter and wrote ‘What can you say about a healthcare bill that’ll mandate insurance companies to provide birth control, sterilization, etc. to employees of Catholic universities, hospitals and churches since this goes against the Catholic religion?'” Swenson said. “We know there is compromising language in place. Some say it doesn’t go far enough and that the real, the much bigger issue is religious liberty, not contraception.”

“Yeah. Well it’s absolutely true that religious liberty is critical,” the President replied, before correcting a falsehood that was embedded in the question. “That’s the reason why we exempted churches, we exempted religious institutions.

“But we did say that big Catholic hospitals or universities who employ a lot of non-Catholics, and who receive a lot of federal money,” the President continued, “that for them to be in a position to say to a woman who works there you can’t get that from your insurance company, even though the institution isn’t paying for it, that that crosses the line where that woman, she suddenly is gonna have to bear the burden and the cost of that. And that’s not fair.”

The contraception issue has faded as a campaign issue, but the President’s response is flawed, nonetheless. He makes the point that these hospitals and other institutions employ non-Catholic women, but fails to point out that the institutions’ denial of coverage is an infringement on those women’s religious liberty, and while he points out that the institutions won’t have to pay for the coverage under the compromise, he doesn’t drive home the point that these women are paying for that health insurance civerage.

That’s a key part of the debate that’s been mischaracterized by people on both sides, the idea that women want “free” contraception. It isn’t free, they pay for insurance like everybody else, but these Catholic employers would like them to accept unequal treatment under the law simply because they work for people who wish to force their own religious beliefs on them.

Here’s the full interview, from WWL-TV: