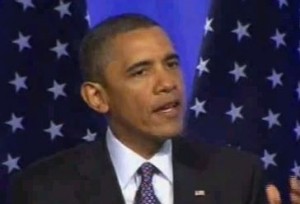 “I guess another way of thinking about this – and this bears on your reporting – I think that there is oftentimes the impulse to suggest that if the two parties are disagreeing then they’re equally at fault and the truth lies somewhere in the middle,” said Obama addressing the members of the media in attendance. “And an equivalence is presented which I think reinforces peoples’ cynicism about Washington generally.”

Okay. The president has identified a principle that generally informs balanced reporting. Of course, it is not reporter’s jobs to disposes their readers of their cynicism, deserved or otherwise, about how Washington works. When there are two sides to a story, as there usually are, good reporting includes those positions evenly and without commentary. This should warm some conservative hearts that have begun to conclude that Obama has been verging on demagoguery in recent days.

Obama continued, “this is not one of those situations where there’s an equivalency.” Ah! And you thought the president was about to espouse a defensible and centrist position. Shame on you.

Obama went on to say that Cap-and-Trade was originally a conservative method to impose market-based curbs on carbon emissions. “Now you’ve got the other party essentially saying we shouldn’t even be thinking about environmental protection,” said Obama. “Let’s gut the EPA.

The president made a similar assertion about the origins of the individual mandate in his health care reform law. “There’s a reason why there’s a little bit of confusion in the Republican primary about health care and the individual mandate since it originated as a conservative idea to preserve the private marketplace in health care while still assuring that everybody got coverage, in contrast to a single payer plan,” said Obama. “Now suddenly this is some socialist overreach.”

Of course, the individual mandate was an idea that sprang from the conservative Heritage Foundation in the 1990s – an idea that was embraced by many prominent Republicans including the likely GOP nominee and former Massachusetts Gov. Mitt Romney. Is the president’s problem with reporters that they are not reporting these facts? If that is the case, then he is exclusively reading Weasel Zippers and/or Legal Insurrection (both of which are worth the read), because these are well-tread equivalencies that have been made and made again in the media.

What the president may be getting at is his desire to make sure the electorate believes that the Republican party generally dropped their support for technocratic programs like Cap-and-Trade and the individual mandate in health care on January 20, 2009 as a purely political maneuver to oppose President Obama (presumably, for its own sake). Now, that would be disingenuous.

“As all of you are doing your reporting, I think it’s important to remember that the positions that I am taking now on the budget and a host of other issues,” Obama concluded. “If we had been having this discussion 20 years ago – or even 15 years ago – would’ve been considered squarely centrist positions.”

There’s the rub. The GOP has had the self-awareness to propose new ideas, experiment with them and, when those experiments failed, discard them accordingly. Sometimes, members of the Republican party may even

The Democratic party, by and large, has no such self-consciousness. Their party has become wholly devoted to the maintenance of ideas and programs that have, in many cases, outlived their their feasibility. Rather than propose fixes to a badly broken system of entitlements – they, along with the President of the United States, chide reporters for not dutifully repeating their own stump-speeches and political rhetoric. This is not an intellectual argument, it’s a temper tantrum.

The president adopted a similar tactic in his Rose Garden speech on Monday, scolding the Supreme Court in advance of their decision on the constitutionality of the Affordable Care Act. After the government’s Solicitor General decidedly lost the intellectual high ground during oral arguments before the Supreme Court, the president was reduced to making hollow threats against the Court.

This sad incident could hardly be considered presidential comportment. Nor was there anything resembling an intellectual defense of the President’s position on the individual mandate – merely, the gnashing of teeth in the face of unfavorable events. Now, even the U.S. Court of Appeals for the 5th Circuit is demanding the president explain himself in written form (three pages, no less. And single-spaced, please).

The president’s honeymoon in the media is long over, and it is unbecoming for him to bemoan this condition – one with which all his predecessors have had to contend. The White House has had a tough couple weeks in the media, but it is not the fault of the media that they report the events that have composed these bad weeks. Perhaps, the White House should focus more on providing the press fewer unfavorable events on which to report.

Watch the press conference from Tuesday below via CSPAN: