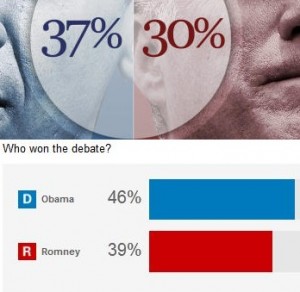 As the battle after the battle rages in the spin room at Hofstra, polls by two major news organizations demonstrate that President Obama was the clear, if not overwhelming, victor over Republican nominee Mitt Romney in the second presidential debate. A CNN poll of debate watchers gave the decision to the President by 46% to Romney’s 39%, while a CBS News poll of “uncommitted voters” scored it 37% for the President, 30% for Romney, and 33% a tie.

Also from the CNN poll:

Meanwhile, 73% said Obama did better than expected, compared to 37% who said the same about Romney.

The results offer a stark contrast from the first presidential showdown on October 3, when 67% of debate watchers said Romney fared better while 25% said Obama won the debate.

There was mixed news for the President in the CBS News poll’s internals:

Obama would also be more likely to help the middle class, according to 56 percent of voters after the debate, compared with 43 percent who said that about Romney.

Given the dramatic effect of the first debate on the polls, the media narrative is developing into a “this maybe evens things up” feel, but that could change, too, as some of President Obama’s stronger moments from the debate are played and replayed.

Update: The President is also the winner by a 48%-44% margin in a Public Policy Polling survey of Colorado voters, with even better news in the internals. Here’s PPP’s press release:

The debate enhanced both candidates’ images with Colorado voters. 40% now say they have a more positive opinion of Obama than they did before the debate, to 36% who see him less favorably. Mitt Romney actually does slightly better on that front with 44% of voters saying they see him more positively now to 35% with a less charitable opinion.