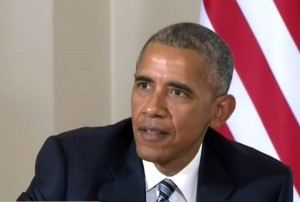 President Obama continued to make news from abroad Sunday morning, taking questions from reporters as he wrapped up meetings with Spanish Prime Minister Mariano Rajoy in Madrid. After deflecting another question about the FBI’s email investigation, the President tackled criticism that have been leveled at the #BlackLivesMatter movement over a handful of anti-cop statements that have been made at protests.

The President acknowledged that sometimes, protesters will say things that are “stupid” or “imprudent,” but he defended the movement as part of the American tradition that includes other great social movements, while cautioning against anti-cop rhetoric:

One of the great things about America is that individual citizens and groups of citizens can petition their government, can protest, can speak truth to power, and that is sometimes messy, and controversial. But because of that ability to protest and engaging free speech, America over time has gotten better. We’ve all benefited from that. The abolition movement was contentious. The effort for women to get the right to vote was contentious and messy. There were times when activists might have engaged in rhetoric that was overheated, and occasionally counter productive, but the point was to raise issues so that we as a society could grapple with them. The same was true with the civil rights movement and the union movement and the environmental movement and the anti-war movement during Vietnam. And I think what you’re seeing now is part of that long standing tradition.

What I would say is this: that whenever those of us who are concerned about fairness in the criminal justice system attack police officers, you are doing a disservice to the cause. First of all, any, any violence directed at police officers is a reprehensible crime and needs to be prosecuted. But even rhetorically, if we paint police in broad brush without recognizing that the vast majority of police officers are doing a really good job, and are trying to protect people and do so fairly and without racial bias, if the rhetoric does not recognize that, then we’re going to lose allies in the reform cause. Now in a movement like Black Lives Matter there will always be folks who say things that are stupid or imprudent or over-generalized or harsh. And I don’t think that you can hold well-meaning activists who are doing the right thing and peacefully protesting responsible for what is uttered in a protest site.

President Obama has cut short his international trip so he can return home to visit Dallas in the wake of the tragedy there.