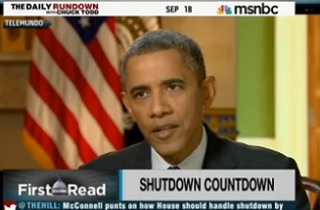 President Obama has come under heavy criticism, from conservatives and mainstream reporters alike, for going ahead with a speech on the economy even as the mass shooting at the Washington Navy Yard was still unfolding. In an interview with Telemundo’s Jose Diaz-Balart, President Obama defended the decision, while side-stepping the main thrust of the criticism, which is that the speech included what’s been described as “partisan attacks” on Republicans.

On Monday, President Obama briefly addressed the Navy Yard shooting that was still unfolding, about four hours after the first shots were fired. He then continued with his speech on the 5th anniversary of the financial crisis, which included criticism of Republicans for threatening to shut down the government. NBC News’ Chuck Todd described the speech’s “odd optics,” while Fox News’ Ed Henry later asked Press Secretary Jay Carney why the President engaged in a “series of attacks on Republicans,” and added “Tonally, did it not seem a little bit off in the middle of this manhunt, people being informed about lives lost to move forward with an attack on the other side?”

In Tuesday’s Telemundo interview, anchor Jose Diaz-Bilart asked the President if it was “bad timing to give a speech on the economy hours after the shooting.”

“Keep in mind I spoke directly to the shooting while we were still gathering information,” the President replied. “I think everybody understands the minute something like this happens, I’m in touch with the FBI, and i’m in touch with the national security team, and we are making sure all the assets are out there to deal with this as well as we can.”

“On the other hand,” he added, “what is also important to remember is that Congress has a lot of work to do right now.”

Here’s the clip, from MSNBC courtesy of Telemundo:

There are really two criticisms at work here, one with which I agree. The 5th anniversary speech was originally scheduled for 11:40 am, and was to be delivered in the Rose Garden. About an hour after the shooting started, the White House announced that event was being moved inside, to the South Court Auditorium in the Eisenhower Executive Office Building, and didn’t start until 12:31 pm. As Henry noted, at that time, the shooting scene was still very much active, and law enforcement was still dealing with the possibility of multiple shooters.

Obviously, you can’t change the date of the anniversary, but the speech could have been delayed until the situation settled. The White house did cancel an event for Monday evening. “In light of today’s tragic events at the Washington Navy Yard and out of respect for the victims and their families, Musica Latina will be postponed to a new date,” said the White House’s scheduling announcement. If the speech just had to be made, it could have been made later in the day. Then again, if something’s going on that makes you not feel comfortable giving a speech outdoors, then maybe you just shouldn’t give it.

Aside from the actual decision to give the speech, however, the notion that Republicans in Congress ought to have derived some sort of political cover due to the mass shooting is offensive and inane. It may have been poor judgment to give the speech at all, but it is downright sick for anyone to suggest that Congressional Republicans were in any way victims on that day.