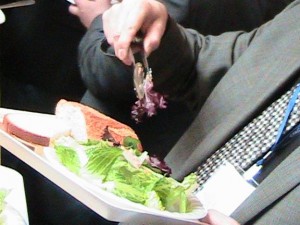 At today’s briefing, Press Secretary Robert Gibbs fielded many questions about the President’s checkup on Saturday, which revealed a slightly elevated LDL cholesterol level. Gibbs confessed that the President could use a little more “party of no” when it comes to the dessert tray, and got a big laugh when he invoked the politically inconvenient salad green arugula. Check out the clip, and find out who, shockingly, is eating arugula these days.

Here’s Gibbs responding to AURN’s April Ryan on whether the White House pastry chef has been given new orders:

During the Presidential campaign, then-Senator Obama’s opponents used his amazement at the price of arugula to buttress their narrative that the candidate was “elitist” and out-of-touch.

It’s a lot easier to joke about it after you’ve won, and in fairness, the quote, “Anybody gone into Whole Foods lately and see what they charge for arugula?”, was enough to get anyone laughed off of any blue-collar job site.

On the other hand, lots of salt-of-the-Earth Americans eat arugula, along with many other fine things. The popularity of cooking shows, which has resulted in greater demand and lower prices for better ingredients, mean that the average American is no longer a Velveeta-scarfing boob. I can think of no better evidence of this than my investigative work at this year’s Conservative Political Action Conference.

In retrospect, the arugula thing could have been worse. While opponents have made minimal hay of the President’s smoking, at least he’s never been accused of smoking clove cigarettes.