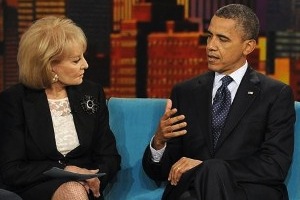 Barack and Michelle Obama both appeared on The View today, and after a few pleasantries about family life, the interview turned to more serious policy issues. The president responded to concerns over the state of the economy, arguing that under a Mitt Romney administration, the economy might survive, but not necessarily thrive. Obama also addressed the violence erupting in the Middle East and made it clear that despite how offensive the controversial film Innocence of Muslims may be, “there’s never an excuse for violence.”

Elisabeth Hasselbeck said that many Americans are concerned with the state of the economy, including the high unemployment rate, and asked Obama if it was unfair to assume Romney’s policies would fail the middle class when many would say the Obama administration’s policies already have. Obama argued that the steps his administration has taken have been to make sure the middle class feels more secure in the long run.

Obama touted the success of the auto industry and consistent private sector job growth. He said that Romney is a good man, but his policies, from tax cuts to relaxing federal regulations, are “the ones that got us into this mess.” Barbara Walters asked the president if it would be “disastrous for the country” if Romney was elected in November. Obama did not explicitly say a Romney administration would be bad for the economy, but he did imply the economy may not thrive under Romney’s watch.

“I think America’s so strong, and we’ve got so much going for us that, you know, we can survive a lot. But the American people don’t just want to survive. We want everybody to thrive. We want folks to have a shot at success. So the question becomes whose policies are more likely to lead us to where we want to go.”

In the next part of the interview, Joy Behar brought up the recent violence in Libya and around the Middle East that may have been spurred by the film Innocence of Muslims. Behar asked Obama if the violence was a direct result of the movie or if it was simply an act of terrorism. Obama said the investigation is still underway, but spoke of the need for the United States to always keep its guard up and be ready to strike back against groups like al-Qaeda.

Whoopi Goldberg addressed the issue of free speech surrounding the film, saying that people should be equally thoughtful about the consequences of what they say. Obama said quite clearly, “There’s never an excuse for violence, I don’t care how offensive this video was,” making it clear he personally found the film very offensive.

Watch part one below: