President Obama: ‘I Have Bent Over Backwards To Work With Republicans’ And Now It’s Time To ‘Eat Our Peas’ 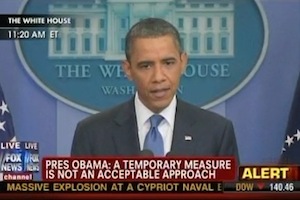 President Obama held a news conference earlier today to express some frustration with the delay in reaching a compromise on the budget deficit talks. Obama stressed that he is not willing to kick the can any further down the road, and is confident that a deal will be reached by the August 2nd debt ceiling deadline since now is the time for everyone to “eat our peas.”

“If we think it’s hard now, imagine how these guys are going to be thinking six months from now in the middle of election season when they’re all up. It’s not going to get easier, it’s going to get harder. So, we might as well do it now. Pull off the band-aid. Eat our peas. Now is the time to do it. If not now, when? . . . I’m prepared to do it. I’m prepared to take on significant heat from my party to get something done. And I expect the other side should be willing to do the same thing, if they mean what they say that this is important.”

Obama stressed that he will not support a deal that balances the budget on the backs of middle-class Americans, while hedge fund managers and authors of best-selling books get let off the hook. And even if some tax increases are being discussed, Obama said none would go into effect until 2013 and beyond.

With Obama lamenting “I have bent over backwards to work with the Republicans” and with Obama and Speaker of the House John Boehner both holding competing press conferences today, it seems as if a deal is still far away from being accomplished.