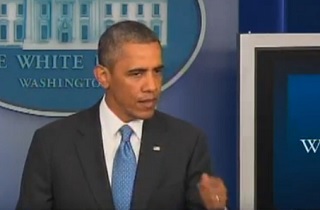 You would never know it by listening to deranged conservatives, but President (then-Senator) Obama‘s 2008 speech on race, necessitated by Rev. Jeremiah Wright-fueled white panic, was chock full of concessions to white resentment, and every racial issue he’s addressed since then has been handled with the most delicate of lace gloves. On Friday morning, the President took off those gloves to tell some hard truths about being black in America, spurred by the verdict in George Zimmerman‘s trial for the killing of Trayvon Martin. It was a speech he could never have been elected giving, but will go down in history.

Early in his first term, President Obama was pilloried by opponents for stating the obvious fact that the police “acted stupidly” by arresting Professor Henry Louis “Skip” Gates for breaking into his own home. Unfortunately, the mainstream media played along with the shrieking, and a “Beer Summit” was required to quell the uproar. Several years later, when the President expressed empathy for the parents of slain teenager Trayvon Martin, you’d have thought he had called for the killing of some cracker babies. In between, this White House has been necessarily careful to ensure that Barack Obama is seen as everybody’s president.

In that 2008 speech, the future President displayed a tendency that would permeate his style for years to come, a desire to connect with those furthest from his own beliefs and experiences. He devoted long passages of that address on race to understanding, even excusing, the racial resentments of white people:

Most working- and middle-class white Americans don’t feel that they have been particularly privileged by their race. Their experience is the immigrant experience – as far as they’re concerned, no one’s handed them anything, they’ve built it from scratch. They’ve worked hard all their lives, many times only to see their jobs shipped overseas or their pension dumped after a lifetime of labor. They are anxious about their futures, and feel their dreams slipping away; in an era of stagnant wages and global competition, opportunity comes to be seen as a zero sum game, in which your dreams come at my expense. So when they are told to bus their children to a school across town; when they hear that an African American is getting an advantage in landing a good job or a spot in a good college because of an injustice that they themselves never committed; when they’re told that their fears about crime in urban neighborhoods are somehow prejudiced, resentment builds over time.

Since then, on deeply-felt issues like gun regulation, the President has consistently extended a comforting hand to the anxieties of his detractors. Today, there was none of that. Given the opportunity to assuage bitter white people about his remark on Trayvon’s killing, President Obama filled it in with tattoo ink.

“Trayvon could’ve been me, 35 years ago,” he said, and when he went on to list the common experiences of white suspicion, there was no concession to the perceived legitimacy of those suspicions. When he began to explain that “African American young men are disproportionately involved in the criminal justice system,” it seemed like he might be going in that direction, maybe taking an opportunity to concede that such statistics color white perception, but instead, he called out those perceptions.

If there was any doubt that this was to be a different kind of speech, it should have evaporated right at the start, when the President pointedly refused to validate the jury’s verdict. “There’s going to be a lot of arguments about the legal issues in the case — I’ll let all the legal analysts and talking heads address those issues,” he said. “The judge conducted the trial in a professional manner. The prosecution and the defense made their arguments. The juries were properly instructed that in a case such as this reasonable doubt was relevant, and they rendered a verdict. And once the jury has spoken, that’s how our system works.”

There was a verdict, and there it was.

Today, President Obama told hard truths about what it’s like to be black in America, as he did in 2008, but this time, he dropped the baby-talk for resentful white people. He dared white people to understand that, while we all have things in common, we’re not all in this together, we’re not all in danger of being shot dead because of the way we look in a hoodie. He dared us to be part of the solution. Let’s see how that goes.