President Obama Implicitly Hits Back At Santorum Over ‘Snob’ Remark 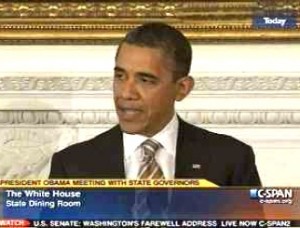 During an address to the National Governor’s Association on Monday, President Obama made a veiled dig at Republican hopeful Rick Santorum for calling him a “snob” over advocating for higher learning. “When I speak about higher education we’re not just talking about a four-year degree,” Obama acknowledged, tacitly zinging the former Pennsylvania Senator.

“We’re talking about somebody going to a community college and getting trained…for that manufacturing job that now is requiring somebody walking through the door handling a million-dollar piece of equipment,” Obama explained. “They can’t go in there unless they’ve got some basic training beyond what they received in high school.”

“We want Americans to get those jobs of the future. It starts, by the way, with just what kind of expectation and ground rules we are setting for kids in high school,” Obama continued. “Right now, 21 states require students to stay in high school until they graduate or turn 18. 21 states! That means 29 don’t. I believe that is the right thing to do, for us to make sure, to send a message to our young people, you graduate from high school at a minimum, and I urge others to follow suit of those 21 states. For students that are ready for college, we have got to make sure that college is affordable.”

Over the weekend, Santorum trashed President Obama for saying all Americans should go to college. “Not all folks are gifted in the same way,” Some people have incredible gifts with their hands!”

Watch below via CSPAN: