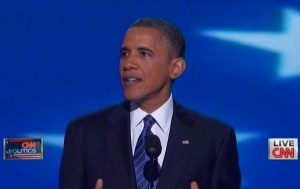 President Barack Obama made the final speech of the week at the Democratic National Convention, in which he acknowledged the difficulties still facing the United States four years after he was elected to the presidency. Obama told the crowd that the choice in November is not between two parties, but a choice “between two fundamentally different visions for the future,” and delivered a personal rebuttal to the agenda Republicans laid out at their convention last week.

Obama recalled his keynote speech at the 2004 DNC convention, where the then-state senator spoke of “hope in the face of difficulty” and uncertainty. He acknowledged the problems facing the country, from the economic crisis to “an avalanche of money and advertising” being thrown into political campaigns. He quipped, “If you’re sick of hearing me approve this message, believe me, so am I.”

The president told the crowd that he ran in 2008 to make sure the United States to continue to fulfill the nation’s promise to all Americans that “responsibility will be rewarded” and “everyone gets a fair shot.” Obama said that while the Republicans last week talked about what they believe is wrong for America, “they didn’t have much to say about how they’d make it right.” He argued that the reason the Republicans did not share their specific proposals was because they believe in the same policies that they’ve tried in the past.

Obama offered a rebuttal to the argument that he has not done everything he pledged he would in 2008.

“I won’t pretend the path I’m offering is quick or easy. I never have. You didn’t elect me to tell you what you wanted to hear. You elected me to tell you the truth. And the truth is, it will take more than a few years for us to solve challenges that have built up over decades. It will require common effort and shared responsibility and the kind of bold, persistent experimentation that Franklin Roosevelt pursued during the only crisis worse than this one.”

He laid out the goals he hopes to accomplish in the next four years of his presidency. Obama touted his administration’s economic accomplishments, and said that rather than giving tax breaks to “corporations that ship jobs overseas,” he has made a commitment to rewarding companies that create new jobs in the United States. He said that the U.S. is “less dependent on foreign oil than at any time in the last two decades,” and pledged to “not let oil companies write this country’s energy plan.”

Obama addressed the challenges of climate change and educating young Americans across the country. On the national security front, the president proudly declared that “a new tower rises above the New York skyline, al Qaeda is on the path to defeat, and Osama bin Laden is dead.” The president acknowledged the geopolitical challenges facing the United States, and said that “Our commitment to Israel’s security must not waver, and neither must our pursuit of peace.”

As for Romney’s foreign policy record, Obama mocked his Republican rival for being stuck in a “Cold War mind warp” for saying that Russia is the United States’ number one enemy.

Obama said that he has tried to work with Republicans in the past few years to cut spending and tackle the debt, but made it clear he rejects their proposal to lower the deficit by “spending trillions more on new tax breaks for the wealthy.” He spoke out strongly against GOP policies on everything from education to Medicare, and emphasized that the United States “only works when we accept certain obligations to one another, and to future generations.”

The president told the crowd that his election four years ago “wasn’t about me. It was about you.” He admitted that there are still an inordinate number of problems facing the country, but said that he is still “hopeful” for the future of the United States.

He ended his speech by reiterating that he never believed the “journey would be easy,” and acknowledged even after his reelection there will still be many challenges ahead. But Obama said that as the nation progresses, “We draw strength from our victories, and we learn from our mistakes, but we keep our eyes fixed on that distant horizon, knowing that Providence is with us, and that we are surely blessed to be citizens of the greatest nation on Earth.”

Watch the full speech below, courtesy of CNN: