President Obama On 60 Minutes: Recovery ‘Will Likely Take More Than One President’ 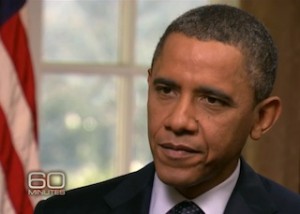 President Barack Obama recently sat down with 60 Minutes reporter Steve Kroft for what was a significant and full-throated defense of what his administration has accomplished in the almost three years he has lived in the White House. Obama pushed back on detractor’s suggestions that he has somehow both been obstinate in legislative negotiations and continually capitulated to the House GOP. He also remarked that when it comes to his potential opponent, ‘it doesn’t really matter’ who Republicans nominate.

Kroft traveled to Osawatomie, Kansas to see President Obama’s recent speech on stimulating the economy and ostensibly establishing the protection and fight for the middle class as a politically advantageous position. Kraft has a longstanding, mutually respectful relationship with the President, having closely covered his meteoric rise to the White House from the very beginning of his campaign. Any notion that Kroft would go easy on the sometimes embattled president quickly abated, though, when Kroft candidly confronted Obama over a stagnant economy, and some less than impressive poll numbers:

Steve Kroft: We have a new CBS poll, which is out this weekend. And I’ll give you the news that’s good for you first. People like you. They respect you. They think that you’re working hard. And they realize that you faced an enormous amount of trouble and problems, many of them inherited. And you’re approval rating is four times higher than the Congress.

Kroft: But they’re not happy with the way you’re doing your job. You’ve got 75 percent of the people in the country think it’s headed in the wrong direction. Seventy-five percent. And 54 percent don’t think that you deserve to be re-elected. I mean, those are not good numbers with 11 months to go before the election.

Obama: Well, look. We’ve gone through an incredibly difficult time in this country. And I would be surprised if the American people felt satisfied right now. They shouldn’t feel satisfied. We’ve got a lot more work to do in order to get this country and the economy moving in a way that benefits everybody, as opposed to just a few.

President Obama’s argument for a second term appears to be that the economic times may be tough right now, but that his leadership on stimulus, among other things, kept us from a more disastrous economic meltdown. Obama’s detractor will, as matter of course, try to hang the stagnant economy around his neck. Right of center media outlets have already tried to belittle Obama’s appearance on 60 Minutes, especially the president’s suggestion that the economic recovery “will likely take more than one president.”

But the interview was the sort of safe and bland exercise in rhetorical platitudes that served more as a campaign appearance than a serious discourse. And in that light, the candid and friendly interview is likely to be viewed as a win by President Obama’s campaign office.

Watch the two part segment below, courtesy of CBS News: