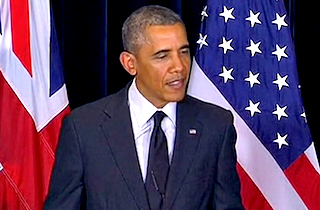 Speaking in Brussels for the G7 Summit — eat it, Russia — President Barack Obama made “no apologies” for the prisoner swap that resulted in the release of Army Sgt. Bowe Bergdahl, or for its presentation, which has turned politically problematic in the past few days.

“We had a prisoner of war whose health had deteriorated and we were deeply concerned about him,” Obama said. “We saw an opportunity and we seized it. I make no apologies for that.”

“With respect to how we announced it, I think it was important for people to understand that this is not some abstraction. This not a political football. You have a couple of parents whose kid volunteered to fight in a distant land, whom they hadn’t seen in five years, and weren’t sure whether they’d ever see again. As Commander in Chief of the United States Armed Forces, I am responsible for those kids. And I get letters from parents who say, ‘If you are, in fact, sending my child into war, make sure that that child is being taken care of.’ And I write too many letters to folks who unfortunately don’t see their children again after fighting a war. I make absolutely no apologies for making sure that we get back a young man to his parents and that the American people understand that this is somebody’s child, and that we don’t condition whether or not we make the effort to try to get them back.”

As to the controversy that has brewed in the days since the announcement, Obama said, “I’m never surprised by controversies that are whipped up in Washington. That’s par for the course.”