President Obama On Oklahoma Tornado Recovery: ‘You Will Not Travel That Path Alone’
video

President Obama On Oklahoma Tornado Recovery: ‘You Will Not Travel That Path Alone’ 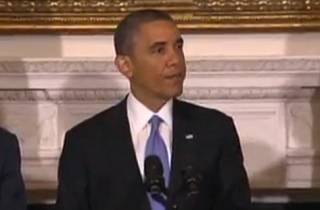 Even as the devastation in Oklahoma is still unfolding, President Obama offered words of support and consolation to the people of that tornado-ravaged state. Speaking from the State Dining Room of the White House Tuesday morning, the President promised help from the government, offered praise for the efforts of the teachers and first responders who worked to protect and rescue victims of the disaster, and urged Americans to help by donating to The American Red Cross.

On Monday, President Obama signed an Oklahoma disaster declaration, making federal funding available to those affected by the tornadoes, and called Oklahoma Governor Mary Fallin (R-OK) to offer prayers and support, and also spoke with Rep. Tom Cole (R-OK), who represents the district that includes Moore, Oklahoma. This morning, the President spoke to the nation about what he called “one of the most destructive tornadoes in history,” which “sliced through the towns of Newcastle and Moore, Oklahoma,” adding that among the victims were children who “were trying to take shelter in the safest place they knew: their school.”

“So our prayers are with the people of Oklahoma today,” he continued. “Our gratitude is with teachers who gave their all to shield their children, with the neighbors, first responders and emergency personnel who raced to help as soon as the tornado passed, and with all of those who, as darkness fell, searched for survivors through the night.”

The President then spoke about his discussions with Oklahoma Gov. Fallin and Moore, OK Mayor Glenn Lewis, the disaster declaration, and the efforts that the country will undertake to help Oklahoma. “I’ve met with Secretary Napolitano this morning, and my Homeland Security and Counterterrorism adviser Lisa Monaco to underscore that point that Oklahoma needs to get everything that it needs right away,” President Obama added. “The FEMA administrator, Craig Fugate, is on his way to Oklahoma as we speak.”

“FEMA staff was first deployed to Oklahoma’s Emergency Operations Center on Sunday, as the state already was facing down the first wave of deadly tornadoes,” Obama continued. “Yesterday, FEMA activated urban search and rescue teams from Texas, Nebraska, and Tennessee to assist in the ongoing search and rescue efforts, and a mobile response unit to boost communications and logistical support. So the people of Moore should know that their country will remain on the ground, there for them, beside them, as long as it takes.”

President Obama also talked about the American spirit that rises to occasions like this. “We have seen that spirit in Joplin, in Tuscaloosa, we saw that spirit in Boston and Breezy Point, and that’s what the people of Oklahoma are going to need from us right now,” Obama said. “For those of you who want to help, you can go online right now to the American Red Cross, which is already on the ground in Moore.”

He concluded with words of encouragement and faith. “In some cases, there will be enormous grief that has to be absorbed,” Obama said, “but you will not travel that path alone. Your country will travel it with you, fueled by our faith in the Almighty, and our faith in one another. So our prayers are with the people of Oklahoma today, and we will back up those prayers with deeds for as long as it takes.”

Here’s video of the President’s remarks, from CNN: