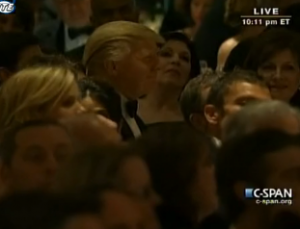 President Obama took to the podium last night at the White House Correspondents’ Dinner and gave a lengthy, well-received speech poking fun at everyone in political headlines. Although since Donald Trump was sitting in the audience as a guest of The Washington Post and suffered through some of the harshest comedic jabs directed squarely at him, it would be hard to say that everyone in attendance completely enjoyed the night.

At the first mention of Trump’s name by Obama, the crowd erupted in applause. Yet by the end of Obama’s roast, it was hard to tell if the crowd was laughing with Trump or at him. And that was a question apparently not lost on Trump either, as he allowed only an occasional smile to break through his mostly stoic expression. Obama unloaded on Trump:

“No one is prouder to put this birth certificate matter to rest than the Donald. And that’s because he can finally get back to focusing on the issues that matter. Like did we fake the moon landing? What really happened in Roswell? And where are Biggie and Tupac?”

Next Obama laughed off Trump’s “credentials and breadth of experience” as he discussed how difficult it must have been for Trump to fire Gary Busey after a task on Celebrity Apprentice. Obama suggested “these are the kinds of decisions that would keep me up at night.”

Trump can certainly take a joke, as evidenced earlier this year when comedians roasted him for two hours on a Comedy Central special. Yet given his latest desire to be taken seriously, and his tendency to respond to anyone’s criticism of him, don’t be surprised if Trump uses this as another opportunity to distinguish himself from the President. It’s easy to imagine that such a response from Trump, in his inevitable next interview, could go something like this: “it takes a team of writers to help Obama entertain a crowded room, but I don’t need anyone’s help to make people laugh when I speak!”