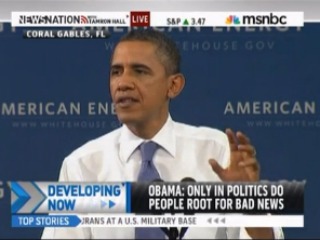 While addressing the issue of climbing gas prices Thursday, President Barack Obama shared that “some politicians, they see this as a political opportunity… I know you’re shocked by that.” He mentioned that one newspaper headline reported that “Republicans are licking their chops” over rising gas prices. “Only in politics,” he added, “do people root for bad news.”

You can bet that, since it’s an election year, they’re already dusting off their three-point plan for two dollar gas. And I’ll save you the suspense: Step one is to drill and step two is to drill. And then step three is to keep drilling.

RELATED: Elisabeth Hasselbeck: President Obama ‘Should Not Be Singing And Having Fun Until Gas Prices Are Lower’

He also referred to call so drill (You know: “Drill, baby, drill!”) as a bumper sticker slogan, not a plan or a strategy to solve energy challenges. And the American people, he added, are smart enough to know the difference.

Under his administration, the President continued, “America is producing more oil today than at any time in the last eight years,” with a record number of oil and gas rigs. “We’re focused on production.” But, he warned, that’s not enough, because the oil market is global. As such, instability in the Middle East is contributing to the U.S.’s growing gas prices. “When uncertainty increases,” he said, “speculative trading on Wall Street increases. And that drives prices up even more.”

He also cited growing demand for oil in countries like China as a long-term, far-reaching reason that prices are going — and will continue to go — up.

Have a listen to his speech, via MSNBC: