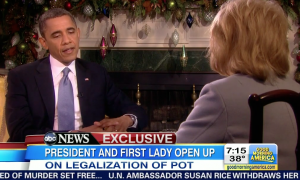 Barbara Walters sat down with both President Obama and First Lady Michelle Obama — and Good Morning America previewed that interview on Friday. In particular: the question of legalizing marijuana and Obama’s own “choom gang” past.

RELATED: Why Won’t President Obama Support Our Right To ‘Choom’ A Doobie Like He Did?

Asked if pot should be legalized, the president replied, “I wouldn’t go that far.” Voters in Washington and Colorado — where recreational use is not legal — spoke out on the issue, he added. “And, as it is, the federal government has a lot to do when it comes to criminal prosecutions. It does not make sense, from a prioritization point-of-view, for us to focus on recreational drug users in a state that has already said that, under state law, that’s legal.”

“We’ve got bigger fish to fry,” he said, citing the “tough” problem: “How do you reconcile a federal law that still says marijuana is a federal offense and state laws that say that it’s legal?”

In the past, Obama’s own pot use (from back in the day) has made the news — particularly following David Maraniss‘ book about the president, in which he wrote that Obama started “a few pot-smoking trends” and was known for “interceptions” when the joint was making its rounds.

Walters said she asked the president what he tells his daughters about that. “He says what a lot of parents say,” Walters said. “‘Don’t make the mistakes I made.'”

“I want to discourage drug use,” he said.