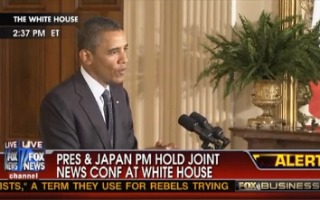 While appearing at a press conference Monday alongside Japanese Prime Minister Yoshihiko Noda, President Barack Obama was asked to give his thoughts regarding the one year anniversary of Osama bin Laden‘s capture and death, as well as his reaction regarding Mitt Romney‘s comment that “anyone” would have approved the plan to capture bin Laden, “even Jimmy Carter.”

I hardly thing that you’ve seen any excessive celebration taking place here. I think that people, the American people, rightly remember what we as a country accomplished in bringing to justice somebody who killed over 3,000 of our citizens. And it’s a mark of the excellence of our intelligence teams and our military teams, a political process that worked and I think for us to use that time for some reflection, to give thanks to those who participated is entirely appropriate and that’s what’s been taking place.

As far as my personal role and what other folks would do, I just recommend that everybody take a look at people’s previous statements in terms of whether they thought it was appropriate to go into Pakistan and take out bin Laden. I assume that people meant what they said when they said it; that’s been at least my practice. I said that we’d go after bin Laden if we had a clear shot at him — and I did.

If there are others who have said one thing and now suggest they’d do something else, then I’d go ahead and let them explain.

RELATED: Mitt Romney bin Busted: ‘Candidate Like Myself’ Would Have Done Bin Laden Raid (Except 2007 Mitt)

The Japanese PM, speaking to the media through a translator, told those gathered that President Obama has been “at the forefront” of the war on terror. He then stressed that, although bin Laden is dead, terrorism continues and, as such, continued efforts are needed to combat it. “Japan and the United States shall work together to root out terrorism,” he concluded.

Have a look, via