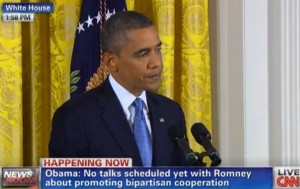 At his first press conference since winning reelection, President Obama extended a generous invitation, and offered gracious words of praise, to defeated rival and former Massachusetts Governor Mitt Romney. As it turns out, Gov. Romney also chose today to poke his head out from wherever federal WitSec agents have stashed him, holding a conference call with donors in which he elected to blame his loss on greedy dark people and youngs. While the President arguably owes Mitt Romney some gratitude for drawing this final stark contrast, he no longer owes him anything else, save a locked White House gate and a glower from the uniformed Secret Service agent who keeps it.

Things were going so well. Defeat was bringing out the best in Mitt Romney, best exemplified by his almost shockingly classy concession speech and welcome disappearance from the face of the Earth. At his press conference earlier today, President Obama set about ensuring Gov. Romney a legacy that extended his classy exit, generously including him in plans for the ongoing “fiscal cliff” negotiations. CBS News’ Nancy Cordes asked him, “Mr. President, on Election Night, you said that you were looking forward to speaking with Governor Romney, sitting down in the coming weeks to discuss ways that you could work together on this nation’s problems. Have you extended that invitation? Has he accepted? And in what ways do you think you can work together?”

The President joked that “everybody forgets that the election was only a week ago and — I know I’ve forgotten. I forgot on Wednesday,” and said he was sure Gov. Romney, like everyone, needed time to catch his breath. President Obama was also in the tough position of explaining what value Romney could be, given that Obama had just gotten finished destroying everything he stands for. He offered “I do think he did a terrific job running the Olympics,” probably the only Romney accomplishment that the President’s campaign didn’t attack during the election. “And that skill set of trying to figure out how do we make something work better applies to the federal government.”

“There are a lot of ideas that I don’t think are partisan ideas but are just smart ideas about how can we make the federal government more customer friendly,” President Obama continued. “How can we make sure that we’re consolidating programs that are duplicative; how can we eliminate additional waste. He presented some ideas during the course of the campaign that I actually agree with. So it would be interesting to talk to him about something like that. There may be ideas that he has with respect to jobs and growth that can help middle-class families that I want to hear. So I’m not either prejudging what he’s interested in doing, nor am I suggesting I’ve got some specific assignment. But what I want to do is to get ideas from him and see if there are some ways that we can potentially work together.”

In fairness, you could argue that there is some political benefit for President Obama to derive from involving Mitt Romney, but beyond the charitable value, you’d be wrong. Mitt Romney has no constituency, and can deliver no political cover with his participation. This was a beautifully-wrapped political gift to send Romney off into the tundra with. Hell, the President nearly had me believing Romney might be marginally useful.

At nearly the same time, perhaps even the same exact time, Gov. Romney was busy cluelessly demonstrating why he lost by blaming his loss on the President’s “gifts” to “specially the African American community, the Hispanic community and young people,” as if 40% of white people hadn’t also voted for President Obama. Yes, Mitt Romney’s race-chumming campaign was helpful in pissing off black and Latino voters, and decent white people, but that’s not the only reason he lost. This is:

First of all, it’s not free; we all paid for it, and we just voted to keep it. But more than that, whether we make $25,000 a year, or $75,000 a year, or are black, or white, or have/do not have a vagina and/or papers, we don’t view seeing a doctor before we’re at death’s door, and it’s too late, as some kind of cushy gift. It’s not a “plus.” It is the minimum that a civilized society should do for its citizens.

President Obama was generous and kind to invite Mitt Romney to the White House, but given the contempt Romney showed for that dwelling’s true owners today, he should only be shown the door.