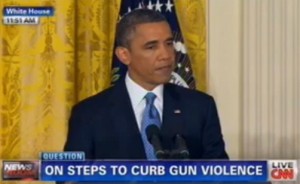 At the final press conference of President Obama‘s first term, one month to the date after the horrific mass shooting at Sandy Hook Elementary School, the first question asked of the President was whether he would push for an assault weapons ban. Despite reports to the contrary, the President’s carefully-worded and expansive response indicated that he will propose “an assault weapons ban that is meaningful,” among other things, and expects Congress to “set politics aside” and vote their conscience.

President Obama began by referencing the gun violence task force led by Vice President Joe Biden, explaining that he will be meeting with Biden later today, and would “expect to have a fuller presentation later in the week.”

“My starting point is not to worry about the politics,” the President said. “My starting point is to focus on what makes sense, what works. What should we be doing to make sure that our children are safe, and that we’re reducing the incidence of gun violence. I think we can do that in a sensible way that comports with the Second Amendment.”

“What you can count on,” President Obama continued, “the things that I’ve said in the past, the belief that we have to have stronger background checks, that we can do a much better job in terms of keeping these magazine clips with high capacity out of the hands of folks who shouldn’t have them, an assault weapons ban that is meaningful, that those are things I continue to believe make sense. Will all of them get through this congress? I don’t know. but what’s uppermost in my mind is making sure I’m honest with the American people, and with members of congress, about what I think will work, what I think is something that will make a difference, and to repeat what I’ve said earlier, if there is a step that we can take that will save even one child from what happened in Newtown, we should take that step.”

In the wake of Vice President Joe Biden‘s remarks following meetings with gun ownership groups and the NRA last Thursday, in which he emphasized consensus on issues like background checks and high-capacity ammunition magazines, there was widespread speculation that the package of proposals to emerge from the Biden task force might not include an assault weapons ban. That speculation increased over the weekend, when Senate Majority Leader Harry Reid (D-NV) expressed doubts about passing such a ban.