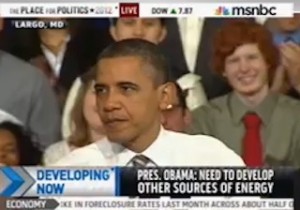 President Obama took a shot at his opponents over their criticism of his energy policy during a speech at Prince George’s Community College in Largo, Maryland. “Now, here’s the sad thing. Lately, we have heard a lot of professional politicians, a lot of the folks who were running for a certain office, who shall go unnamed, they’ve been talking down new sources of energy. They dismiss wind power. They dismiss solar power. They make jokes about biofuels. They were against raising fuel standards. I guess they like gas guzzlers. They think that’s good for our future. We’re trying to move towards the future. They want to be stuck in the past!” Obama exclaimed to cheers from the crowd. “If some of these folks were around when Columbus set sail, they probably must have been founding members of the flat earth society. They would not believe that the world was round!”

“They probably would have agreed with one of the pioneers of the radio who said, “Television won’t last. It’s a flash in the pan,” Obama added, and gave a laundry list of people proven wrong for downplaying innovation.

“One of Henry Ford’s advisors was quoted saying, “The horse is here to stay but the automobile is only — a fad!” Obama joked.

“One of my predecessors, President Rutherford B. Hayes, reportedly said about the telephone, ‘It’s a great invention but who would ever want to use one?'” Obama said. “That’s why he’s not on Mt. Rushmore!”

Watch President Obama take a shot at his opponents below via MSNBC: