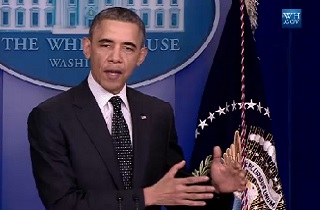 Hot on the heels of a party-line Senate vote to change filibuster rules, President Obama appeared in the White House’s Brady Briefing Room to voice his support for the Democratic-led change. While he acknowledged that “neither party has been blameless” for the use of the filibuster, the President said that “today’s pattern of obstruction, it just isn’t normal, it’s not what our founders envisioned,” and expressed his support for the rule change.

The rule change will allow for confirmation of executive nominees and most federal judiciary nominees without having to clear the 60-vote filibuster threshold, but the President began by criticizing the filibuster more broadly, saying that “All too often, we have seen a single senator, or a handful of senators, choose to abuse arcane procedural tactics to unilaterally block bipartisan compromises, or to prevent well-qualified, patriotic Americans from filling critical positions of public service in our system of government.”

“Now, at a time when millions of Americans have desperately searched for work,” the President continued, “repeated abuse of these tactics have blocked legislation that might create jobs. They have defeated actions that would help women fighting for equal pay. They have prevented more progress than we would have liked for striving young immigrants trying to earn their citizenship. Or it’s blocked efforts to end tax breaks for companies that are shipping jobs overseas. They’ve even been used to block common sense and widely supported steps to protect more Americans from gun violence, even as families of victims sat in the Senate chamber and watched.”

While he conceded that “neither party has been blameless for these tactics,” the President said that “today’s pattern of obstruction, it just isn’t normal, it’s not what our founders envisioned.”

“So I support the step a majority of Senators today took to change the way that Washington is doing business,” President Obama continued. “More specifically, the way the Senate does business. What a majority of senators determined by senate rule is that they would restore the long-standing tradition of considering judicial and public service nominations on a more routine basis.”

The President also pointed out that “Over the six decades before I took office, only 20 presidential nominees to executive positions had to overcome filibusters. In just under five years since I took office, nearly 30 nominees have been treated this way.”

He added that “This obstruction gets even worse when it comes to the judiciary. The constitution charges the president with filling vacancies to the federal bench. Every president has exercised this power since George Washington first named justices to the Supreme Court in 1789. But my judicial nominees have waited nearly 2 1/2 times longer to receive yes or no votes on the senate floor than those of President Bush. and the ones who eventually do get a vote generally are confirmed with little if any dissent. This isn’t obstruction on substance, on qualifications. It’s just to gum up the works.”

Toward the end of the speech, the President did offer some praise for the Senate. “The senate has actually done some good bipartisan work this year,” he said. “Bipartisan majorities have passed common sense legislation to fix our broken immigration system and upgrade our ports. It’s passed a farm bill that helps rural communities and vulnerable Americans. Passed legislation that would protect Americans from being fired on their sexual orientation.”

“We know there are folks there, Republican and Democrat, who want to get things done,” he continued, “and frankly, privately, they have expressed to me their recognition that the system in the senate had broken down and what used to be a sporadic exercise of the filibuster had gotten completely out of hand. I believe, I’m confident, that that spirit will have a little more space now.”

Here’s video of the President’s remarks, via CNN:

Have a tip we should know? [email protected]aite.com