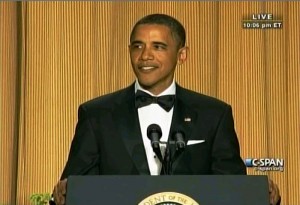 President Obama was introduced with an intentionally cheesy video package (picture Barney Stinson‘s video resume from “How I Met Your Mother”) set to Rick Derringer‘s “I Am A Real American” and featuring a repeating shot of his birth certificate set against an American flag background. Obama addressed the birther issue in his speech as well, announcing “I am prepared to go a step further…I am releasing my official birth video,” which turned out to be the opening number from The Lion King. Well played, Mr. President.

Obama’s delivery, so effective for most public addresses, didn’t lend itself so well to delivering zingers. Nonetheless, he made the handicap work for him, poking fun at criticism he’s received for being “professorial” and “arrogant.” He made a point to address the haters individually: of Matt Damon‘s criticism of his performance so far, he said “I just saw The Adjustment Bureau, so right back ‘atcha buddy!” He also took the opportunity to start a rumor that Rep. Michele Bachmann was actually born in Canada, concluding gravely “Yes, Michele, this is how it starts.”

The President even had a few choice words for Donald Trump, who was in the audience tonight as a guest of The Washington Post (we’re…still sort of confused about this). Obama suggested that Trump must be relieved to put the birther issue to rest, so he can focus on important questions, like “Where are Biggie and Tupac?” and “Was the moon landing faked?” Things got real when Obama held up an episode of “Celebrity Apprentice” as an example of Trump’s very presidential leadership ability, citing his firing of Gary Busey two weeks ago as “the kind of decision that would keep me up at night. Well handled, sir!” Ouch! Trump bore this onslaught, which was actually kind of savage, with dignity, smiling tightly throughout.

Things dragged a bit with a fake movie trailer of unexpected bloopers from Obama, and… just some normal everyday gaffes from Joe Biden, called “The President’s Speech.” Obama seemed most comfortable when he took a serious moment to acknowledge the real danger that journalists face covering natural disasters like the recent storms in the South, or the recent revolutions in the Middle East. Unsurprisingly, the speech netted a standing ovation. No word on whether Trump stayed in his seat or not!

See video of the president’s speech below via C-SPAN: