Obama Talks Gay Marriage, Romney, And The Kardashians On The View
videos

Obama Talks Gay Marriage, Romney, And The Kardashians On The View 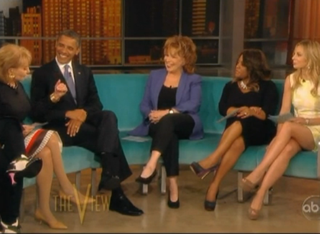 President Obama made his second appearance on The View today, a fairly unorthodox forum in which a sitting president can be challenged, and unorthodox challenges he met: questions about how he really felt about Vice President Joe Biden, how he could improve the economy more than Mitt Romney, and which Kardashian is the one with the recent divorce. Indicative of the atmosphere? An exchange in the second segment where Barbara Walters noted, “this is the first time we have all sat down and spoken without crosstalk,” to which the President remarked it made him a bit ill at ease: “you’re all so well-behaved!”

RELATED: The View Panel Tussles Over The Question: ‘Is Obama Too Cool?’

“I like hanging out with women,” the President said with a smile, before going into a discussion on his stance on gay marriage. Joy Behar brought up the rumor that it was possible the President would announce his support on the program, which he confirmed was “a possibility.” He also noted that he was “okay” with the Vice President jumping the gun on the official White House stance because “it came out of a generosity of spirit.” “I’m never going to blame anyone for telling what they believe,” he reiterated, adding a stance he had previously been public about– thinking the Defense of Marriage Act unconstitutional and being in favor of civil unions, but adding that “meeting people, friends, family, in wonderful relationships, who tell me words matter” helped change his position on marriage. Still, he noted that it was “important for us to make sure that churches and religious institutions are respected” in the way they govern.

Elisabeth Hasselbeck asked the President to distinguish his stance with Romney’s, since the latter had also supported civil unions. The distinction for the President was clear: “Romney wants a constitutional amendment.”

The President also got to speak about his family for some time– as Sherri Shepherd wondered whether, after his impromptu Al Green performance at the Apollo, “were Malia and Sasha embarrassed or are you their ringtone?” “You’re just the right amount of embarrassing,” the President quoted his eldest as saying. In a different segment, he also spoke about the economy and banking regulation, and gave his opinion on the JP Morgan investigation.

After a pop culture quiz in which the President admitted to knowing which Kardashian recently got divorced (“because he was a baller,” he says of Kris Humphries to excuse himself) and claimed not to know the book Fifty Shades of Grey (“I’ll ask Michelle what’s going on when I get home), the President spoke about basketball for some time and explained the rules in the house for the two girls– no cell phones, TV, or internet on weekdays save for school, and no Facebook. As all The View episodes should end, this one concluded with Barbara Walters confessing to taking some White House napkins once in a while, to which the President jokingly replied he had the Secret Service on her.

The President’s discussion on same-sex marriage, followed by the family talk and pop culture quiz, in two clips via ABC below: