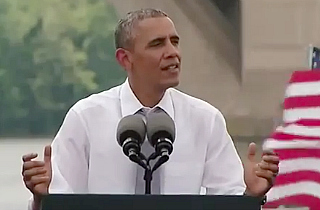 On Tuesday afternoon, President Barack Obama continued his streak of railing against Republican “obstructionism” in Congress, taunting the rival party for “doing nothing” while threatening legal action against the president to curb executive authority.

Speaking near the Key Bridge in Washington, D.C., Obama implored Congress to continue funding for the Federal Highway Trust Fund, and suggested that the political system is currently rigged in favor of those who aren’t in need, by those lawmakers who refuse to take action.

“So far this year, Republicans in Congress have blocked or voted down every serious idea to strengthen the middle class—not ideas that are unique to me,” he told the crowd. “This isn’t Obama Bridge. It’s Key Bridge. But the Republicans have said no to raising the minimum wage; have said no to fair pay; they’ve said no to extending unemployment insurance for over three million Americans looking for a new job.”

The president then noted his controversial spate of executive actions on immigration and gender-identity discrimination, saying, “They criticize me for this — Boehner sued me for this — and I told him I’d rather do things with you, pass some laws, make sure the Highway Trust Fund is funded so we don’t lay off hundreds of thousands of workers.”

Ultimately, he concluded, “It’s not that hard. Middle-class families can’t wait for Republicans in Congress to do stuff. So sue me. As long as they’re doing nothing, I’m not going to apologize for trying to do something.”