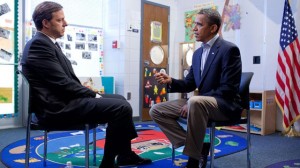 In a wide-ranging Nightline exclusive interview with ABC News Chief White House Correspondent Jake Tapper, President Obama said he’s not worried about who the Republican nominee is going to be, and told Tapper that the GOP candidates’ ideas aren’t anything new. “What I am certain of,” the President said, “is that there’s going to be a very clear contrast between whoever they nominate and their vision of where we should take the country and where I believe we should take the country.”

Tapper, who interviewed the President during the Jamestown, NC leg of his current American Jobs Act bus tour, asked the President what he thought of the current Republican field’s economic proposals.

The President took the opportunity to take a broader swipe, telling Tapper, “I’ve got to say, what I haven’t heard is anything new, across the board, whether it’s coming from Congress or from the Republican candidates so far.”

The President said, of the 9-9-9 plan “essentially what it says is that we’re going to make sure that the wealthiest among us pay less and we replace any revenues with a sales tax that would be a huge burden on middle class families and working families.”

“That’s not new,” he continued. “I remember a candidate who ran against me, Alan Keyes who was running against me in the Senate, had a similar kind of proposal.”

The President also ridiculed the concurrent themes of all the candidates’ proposals. “The overall thrust seems to be if we roll back regulations, and we lower taxes on those who are doing best, oftentimes by imposing more taxes on middle class and working class families, that somehow the economy is going to get better,” he said.

Tapper also asked about the President’s reelection campaign’s laserlike focus on Mitt Romney. Noting the amount of attention being given to Romney, he asked the President if he thought Romney would be the toughest challenger to beat.

“I genuinely am not spending a lot of time worrying about who their candidate is going to be,” said the President.

The President pointed out the capricious nature of the race so far, saying, “We’ve already seen people who get enormous attention suddenly go by the wayside. Somebody else will be lifted up. They’ll go through the process and sometime next year they’ll have a nominee.”

Tapper pointed out that “The math is tough for you: 47 percent of the country voted against you with everything going your way, pretty much. It’s not difficult to think that there are four million Americans who thought well, I gave him a shot. It didn’t work. Unemployment is still high. Let’s give this other guy another chance.”

President Obama responded with a canny description of how electoral politics and governing politics intersect for him, at this point. By getting Republicans to set politics aside and pass the components of the American Jobs Act, “there will be an awful lot of people out here doing better and are in a stronger position to dig themselves out of this very difficult economic circumstance we’ve been in.”

Tapper and the President also covered a wide variety of other topics, including the Fast and Furious gunrunning debacle. You can watch the full interview here. Here’s the clip, from ABC News: