President Obama To Appear On Mythbusters, Won’t Blow Anything Up 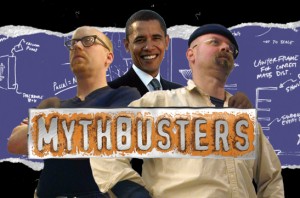 The entertaining Discovery Channel series Mythbusters, a show in which wacky science types do their best to disprove the myth that they ran out of good myths midway through season two, is getting a very special guest in an upcoming episode: none other than President Obama. Obama will be helping the team discover if there’s any truth to the story of Archimedes’ army-destroying heat ray. However, the show already debunked that myth in a 2006 episode so we can all assume, of course, that it was just a cover story to lure Obama in so they could work on the real myth, the president’s American birth certificate!

In an episode of ‘Mythbusters’ on the Discovery Channel to be shown on Dec. 8, President Obama will help determine whether the Greek scientist Archimedes really set fire to an invading Roman fleet using only mirrors and the reflected rays of the sun.

Legend has it that during the Siege of Syracuse, circa 214 B.C., Archimedes destroyed the enemy ships with fire, the result of a ‘heat ray’ involving a series of mirrors set up on the coast. But the question has long remained: Did it really happen that way?

The appearance from the president is part of an initiative to get American children more interested in science and math so that, in the future, we won’t lose the coming space wars because all of us Liberal Arts students are less likely to build a rocket than to write a one-act play about building a rocket. As such, the episode sounds like a lot of fun. Or, at least it did, until Obama announced during the White House science fair today, that he wouldn’t be blowing anything up in the episode. Bad idea, Mr. President. Everyone knows the best Mythbusters segments are the explodey ones. Now, not only will Obama be taking time off to appear on a basic cable TV show, but he’ll probably be overshadowed by a segment testing out the veracity of a Transformers 2 scene.