President Obama To Appear On The Daily Show On October 18

President Obama To Appear On The Daily Show On October 18 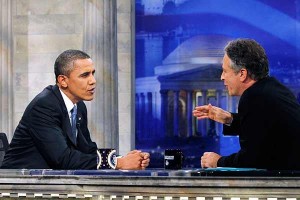 President Obama is slated to pay a visit to Jon Stewart on The Daily Show on Thursday October 18. It marks the president’s sixth appearance on the show — and second since taking office.

The last time Obama was on the show was in October 2010.

“The Daily Show” airs Monday-Thursday at 11:00 p.m. and repeats at 1:00 a.m. the same night and at 10:00 a.m. and 7:30 p.m. the following day (all times ET/PT). Full episodes, as well as clips, are posted for viewing the following day at www.thedailyshow.com with URL and embed links. Fans can follow @TheDailyShow on Twitter or “like” The Daily Show on Facebook.

Jon Stewart and Rory Albanese are the Executive Producers of “The Daily Show with Jon Stewart” with Steve Bodow, Kahane Cooperman, Jennifer Flanz and Adam Lowitt serving as Co-Executive Producers. Supervising Producers are Tim Carvell, Pam DePace, Tim Greenberg, Hillary Kun and Stuart Miller. Jill Katz is Producer and Executive in Charge of Production. The series’ Head Writer is Carvell and it is directed by Chuck O’Neil.