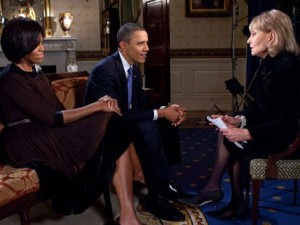 President Obama sat down with Barbara Walters for a holiday weekend special set to air next Friday called A Barbara Walters Special: A Thanksgiving Visit with President and Mrs. Obama and it seems that Ms. Walters was able to generate draw out his thoughts on the 2012 campaign. Though he says that he’s not giving much consideration to the coming presidential run, he is instead focusing on being “the best possible president.” And, he said, he certainly isn’t focused on a potential challenge from former Alaska Gov. Sarah Palin.

When asked specifically if he thinks he can beat Sarah Palin in 2012, the president told Walters “I don’t think about Sarah Palin.”

“Obviously Sarah Palin has a strong base of support in the Republican Party and I respect those skills,” Obama said. “But I spend most of my time right now on how I can be the best possible president. And my attitude has always been, from the day I started this job that if I do a good job and if I’m delivering for the American people the politics will take care of itself.

“If I falter and the American people are dissatisfied, then I’ll have problems,” he said.

The interview, which also included first lady Michelle Obama, covered a wide range of topics including the recent events in North Korea, the latest controversies over TSA screenings in airports, the “shellacking” his party took in the 2010 midterms, the economy, and, of course, Thanksgiving traditions.

The full interview, “A Barbara Walters Special: A Thanksgiving Visit with President and Mrs. Obama,” will air Friday, Nov. 26 at 10 p.m. ET.