President Obama To Diane Sawyer: ‘I Do A Lot Of Praying’ On Difficult Decisions 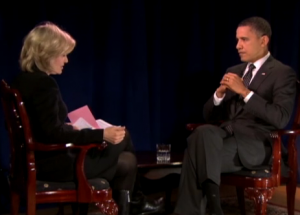 In an interview with Diane Sawyer, President Obama spoke confidently about the mission in Libya, while also taking a moment to make light of some recent criticism he’s received. Obama predicted that Gaddafi knows “the noose is tightening” and that the people of Libya will soon be free from being under his control.

Obama elaborated on the rationale behind persuading the international community to handle Libya:

I think that it is precisely because we organized an international coalition, we don’t have to shoulder this entire burden. I mean, the fact of the matter is it’s not going to be U.S. planes that are maintaining the no-fly zone. It is a NATO operation . . . what I didn’t want was a situation in which everybody else was a free rider on our U.S. military. I wanted to make sure you guys say this is important to you, make sure that you are actually putting some skin in the game.

I do a lot of praying. Absolutely. Every night, right before I go to bed. You know, and I am praying that – I’m making the best possible decisions, and that I’ve got the strength to serve the American people well. And frankly as President of the United States, you know, your responsibilities extend beyond beyond our borders. And these decisions are difficult.

Finally, Obama addresses the fact that many criticized him for taking a few minutes to complete a NCAA basketball bracket. Obama humorously responds, “obviously, I hadn’t been spending that much time studying it since I don’t have anybody in the Final Four.”

Watch the clip from ABC News below: