President Obama 'I Am The Underdog' | George Stephanpoulos
video

President Obama Handicaps 2012 Presidential Race: ‘I Am The Underdog’ 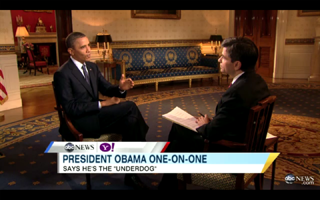 In an interview with ABC’s George Stephanopoulos, President Barack Obama conceded that in the approach to the 2012 election, “I am the underdog.” And although readily willing to acknowledge that Americans are “not better off” than they were four year ago and that the flagging economy will be his biggest obstacle, he showed little sign of concern. “I’m used to being the underdog,” he explained confidently. “At the end of the day people are going to ask — who’s got a vision?”

Obama argues that it is “so critical for us to make sure that we are taking every action we can take to put people back to work,” and that his administration has made “steady progress to stabilize the economy,” an effort that he believes Americans recognize despite the “too high” unemployment rate. “Here is the broader point,” he offered. “I don’t think the American people would dispute that at every step of the way, I have done everything I can to try to get the Republican party to work with me, and every time, they’ve said no.” His relations with the GOP, he admits, “have not been good over the pat several months.”

In the same interview, the President also addresses Bank of America’s debit fees (“This is exactly why we need this consumer finance protection bureau that we set up that is ready to go”), Solyndra (“Hindsight is always 20/20”), Al Qaeda (“I think that we are in a position where over the next couple of years, if we stay on it, that– it’s gonna be very difficult for them to mount the kinds of spectacular attacks– that we saw on 9/11.”), and his “evolving” views on gay marriage (“I’m not going to make news right now,” and “I’m still working on it”).

Read the full transcript of the interview here, or the cut segment, courtesy of ABC/Yahoo below: