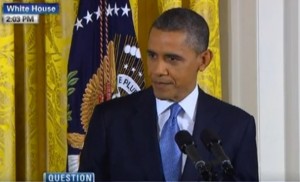 At President Obama‘s first post-election press conference (and first full presser since March), things got a little bit heated when Obama was asked about threats, from Sen. Lindsey Graham and John McCain, to block any potential nomination of Ambassador Susan Rice as Secretary of State. The President wouldn’t comment on the specific nomination, but gave a lengthy, impassioned defense of Amb. Rice, and called out those who are trying to scapegoat her, saying “If Senator McCain and Senator Graham and others want to go after somebody, they should go after me.”

U.S. Ambassador to the United Nations Susan Rice has come under fire after the September 11 attacks in Benghazi, Libya, particularly over her performance in some Sunday show appearances later that week. At Wednesday’s press conference, the President was asked, by ABC News’ Jonathan Karl, “Senator John McCain and Senator Lindsey Graham both said today they want to have Watergate-style hearings on the attack on the US consulate in Benghazi, and said if you nominate Susan Rice to be Secretary of State, they will do everything in their power to block her nomination because, as Senator Graham said, he simply doesn’t trust Ambassador Rice after what she said about Benghazi. I would like your reaction to that, and would those threats deter you from making a nomination like that?”

“I’m not going to comment at this point on various nominations I’ll put forward to fill out my cabinet for the second term,” the President began. “Those are things that are still being discussed. But let me say specifically about Susan Rice, she has done exemplary work. She has represented the United States, and our interests, in the United Nations with skill and professionalism, and toughness and grace. As I said before, she made an appearance, at the request of the White House, in which she gave her best understanding of the intelligence that had been provided to her.”

President Obama’s gaze turned to a low glower. “If Senator McCain and Senator Graham and others want to go after somebody, they should go after me,” he said, adding “I’m happy to have that discussion with them. But for them to go after the U.N. Ambassador who had nothing to do with Benghazi, and was simply making a presentation based on intelligence that she had received, and to besmirch her reputation, is outrageous.”

The President went on to say “I think it is important for us to find out exactly what happened in Benghazi, and I’m happy to cooperate in any ways that Congress wants. We have provided every bit of information that we have. And we will continue to provide information and we have got a full blown investigation. And all that information will be disclosed to congress. and I don’t think there is any debate in this country that, when you have four Americans killed, that’s a problem. And we got to get to the bottom of it, and there needs to be accountability. We’ve got to bring those who carried it out to justice. They won’t get any debate from me on that.”

In a parting shot to Sens. Graham and McCain, the President concluded “But when they go after the U.N. Ambassador, apparently because they think she’s an easy target, then they got a problem with me. And should I choose, if I think that she would be the best person to serve America in the capacity of the State Department, then I will nominate her. That’s not a determination I’ve made yet.”