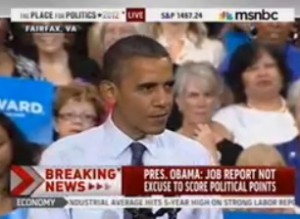 In a speech at Fairfax, Virginia’s George Mason University, President Obama continued his post-debate resurgence by touting this morning’s jobs report, which saw the unemployment rate fall to 7.8%, while pressing his attacks on opponent Mitt Romney‘s “Extreme Makeover” at Wednesday night’s debate, and Romney’s pledge to pry Big Bird from the government teat. The President pointed out the “5.2 million new jobs over the past 2 1/2 years,”  and praised his opponent for “finally getting tough on Big Bird. Rounding him up.”

The President added, “Elmo has got to watch out, too. Governor Romney plans to let Wall Street run wild again, but he’s going to bring down the hammer on Sesame Street.”

While Obama supporters may be asking where was this guy Wednesday night, the good unemployment news, plus growing outrage over Romney’s attacks on Big Bird and pathological dishonesty, threaten to overwhelm whatever gains Romney made with that victory.

President Obama began by speaking about the September jobs report, saying “Now, after losing about 800,000 jobs a month when I took office, our businesses have now added 5.2 million new jobs over the past 2 1/2 years. This morning, we found out that the unemployment rate has fallen to its lowest level since I took office.”

The President also tempered his enthusiasm over the new jobs numbers, as he always does, adding that “every month reminds us that we’ve still got too many of our friends and neighbors who are looking for work, and there are too many middle class families that are still struggling to pay the bills.”

Obama also included a bit of advice for his opponents. “They were struggling long before the crisis hit,” the President said, “but today’s news certainly is not an excuse to try to talk down the economy to score a few political points.”

Elsewhere in the speech, President Obama attacked Gov. Romney’s debate performance, a theme he hit on Thursday, as well. “My opponent has been trying to do a two-step and re-position, and got an extreme makeover,” the President said, to laughs from the crowd. “But the bottom line is his underlying philosophy is the top down economics that we’ve seen before. He think that is if we just spend another $5 trillion on tax cuts, that, yes, skew towards the wealthiest, if we get rid of more regulations on Wall Street, then our problems will be solved. Jobs and prosperity will rain down from the sky, the deficits will magically disappear, we will live happily ever after. Even though he’s been proposing this plan for months now, he’s had a little trouble explaining just how it would work without blowing a hole in the deficit or making middle class families pick up the tab.”

“The other night,” the President continued, “he ruled out asking millionaires and billionaires to pay even a dime more in taxes. He said there’s no way that he’d close the loophole that gives big oil companies billions each year in corporate welfare. Ending tax breaks for corporation that move jobs and profits overseas, he had never heard of such a thing. Who knew? Who knew?”

President Obama then mocked Romney’s attack on public broadcasting, though more sharply than before. “When he was asked what he’d actually do to cut spending and reduce the deficit, his big example was to go after public television,” Obama said, punctuated by laughter from the crowd. “So for all you moms and kids out there, don’t worry, somebody is finally getting tough on Big Bird. Rounding him up. Elmo has got to watch out, too. Governor Romney plans to let Wall Street run wild again, but he’s going to bring down the hammer on Sesame Street. It makes perfect sense.”

The crowd-pleasing speech demonstrates just how wide the gulf is between the gains President Obama can expect as a campaigner, and as a debater. which explains his reluctance to really get into the fray Wednesday night. While things seem to be working out almost too perfectly for him, the President might want to factor how badly that debate loss began to damage him before fixing his strategy for the next two.

Here’s the portion of President Obama’s speech that aired on MSNBC: