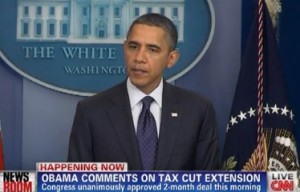 This afternoon, President Obama delivered remarks in the White House briefing room on the last-minute passage of the payroll tax cut extension. He celebrated the passage of the compromise, crediting the average Americans who participated in a social media push to get it done, and urged Congress to pass a full year extension when they return. Toward the end, though, the President ran afoul of a rule that GOP candidate Newt Gingrich spoke about earlier this week, that “no federal official at any level is currently allowed to say ‘Merry Christmas.'”

Gingrich, speaking to voters in Iowa on Monday, showed off his vaunted intellect by telling voters that, after “investigating this for the last three days,” he had determined that “no federal official at any level is currently allowed to say ‘Merry Christmas.'”

The President, as it turns out, is a federal official, and toward the end of his remarks today, uttered those forbidden words. In fact, he uttered them during several recent speeches, right there in the White House.

It should surprise no one, though, that there is no such rule, not even for members of Congress, who can wish people a merry/happy whatever-they-want, as long as they pay for the postage themselves. If the government pays for the postage, they can still say “Merry Christmas,” etc., as long as that’s not the primary subject of the letter.

Even though he got it wrong, though, former House Speaker Gingrich deserves credit for spending three days investigating this rule. We know there are far more lucrative ways for him to spend his time. It’s that kind of diligent research that will surely help him smoke President Obama in debates should Gingrich get the GOP nod.

Here’s video of the President’s remarks, followed by a transcript:

Transcript:(via email from The White House)

THE PRESIDENT: Good afternoon, everybody. I know you’re all looking forward to spending time with their families over the holidays, but we did have one last piece of business to finish up. I said it was critical for Congress not to go home without preventing a tax increase on 160 million working Americans, and I’m pleased to say that they’ve got it done. So I want to thank all the members of Congress for ending the stalemate and making this happen.

Because of this agreement, every working American will keep their tax cut — about $1,000 for a typical family. And that’s — translates into an extra $40 or so in every paycheck. Vital unemployment insurance will continue for millions of Americans who are looking for work. And when Congress returns, I urge them to keep working, without drama, without delay, to reach an agreement that extends this tax cut as well as unemployment insurance through all of 2012.

Last week, I said that this should be a formality, and that’s still the case. So let’s make sure that we extend this tax break and unemployment insurance for a full year for our families, but also for our economy. It’s the right thing to do because more money spent by more Americans means more businesses hiring more workers. And that’s a boost for everybody, and it’s a boost that we very much need right now.

Finally, I want to take a moment to thank my fellow Americans for bringing their voices to this debate. I met with several here at the White House yesterday. I really think it takes courage to believe that your voice can make a difference. And I promise you, the American people, your voices made a difference on this debate. Whether you tweeted or called or wrote, you reminded people in this town what this debate and what all of our debates should be about — it’s about you. It’s about your lives. It’s about your families. You didn’t send us to this town to play partisan games, and to see who’s up and who’s down. You sent us here to serve and make your lives a little bit better; to do what’s right. And fortunately, that’s how this week ended.

So this is some good news, just in the nick of time for the holidays. I do want to be clear though: We have a lot more work to do. This continues to be a make-or-break moment for the middle class in this country, and we’re going to have to roll up our sleeves together — Democrats and Republicans — to make sure that the economy is growing, and to make sure that more jobs are created.

We’ve got an economy that is showing some positive signs; we’ve seen many consecutive months of private sector job growth. But it’s not happening as fast as it needs to. And that means that we’ve got to redouble our efforts, working together. It also means that we’ve got to make sure we’re rebuilding an economy where if you work hard, that work will be rewarded; the kind of economy where everyone is doing their fair share and everybody plays by the same set of rules, everybody has a fair chance and everybody is acting responsibly, including those of us here in Washington.

So I want to wish everybody a Merry Christmas, happy holidays, a happy New Year to you and your families — and that includes everybody here in the press corps. I know you guys have been working hard, and your families will be happy to spend a little more time with you over the next few days.

I also want to make sure to send the warmest holiday wishes to all the men and women in uniform who are serving overseas right now and may not have a chance to see their families during this holiday season. We are grateful for everything that you do.

All right? Thank you, guys. Aloha.