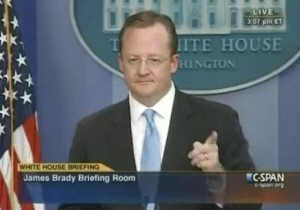 At Tuesday’s White House briefing, Jon Stewart‘s “Rally to Restore Sanity and/or Fear,” along with President Obama’s appearance on The Daily Show,was a hot topic. Among Press Secretary Robert Gibbs‘ revelations were that, like Glenn Beck‘s  “Restoring Honor” rally, Gibbs had not discussed Stewart’s shindig with the President, the Daily Show appearance was booked long before the rally was conceived, and that the President would not be making an appearance at the rally.

There were also a few exchanges that underscored Jon Stewart’s influence, and a priceless quip by Mother Jones’ David Corn.

When a reporter asked Gibbs if the President is concerned that “a leading comedian is holding a political rally,” David Corn joked (off-mic), “One already did, in August.”

Gibbs told me that the President wouldn’t be attending the rally, but would instead begin the midterm campaigning home stretch this weekend. Thus seems like a bit of a missed opportunity, as Gibbs also told CBS’ Mark Knoller that The Daily Show is an effective way to reach young voters just before the midterms. A quick cameo at the rally would seem like time well spent.

Here is a compilation of the Stewart-related questions from the briefing.

Tommy Christopher: Well, the last one is really quick.  Is there any chance the President is going to put in an appearance at the rally?

MR. GIBBS: Put in an appearance?

Tommy Christopher: At the rally to restore honor/fear — sanity and fear.

MR. GIBBS: No, we’ll be flying around to the other states.

Q    Robert, just about The Daily Show interview.  You explained kind of the President’s reasons for going on it.  It does coincide with the run-up to this big rally that he’s having over the weekend.

MR. GIBBS: I’ve not talked to the President about the rally.  I don’t know what his opinion is on it.

Mark Knoller: And The Daily Show is part of that (GOTV effort)?

MR. GIBBS: I think absolutely.  I think the — we have — two things.  I think obviously you’ve got a constituency of younger voters that watch that show, and it’s a good place to go and reach them.

They get their information from not just television news and cable and newspapers and radio and the Internet.  They get them from — there’s a lot of different places.  And the President hasn’t been shy about going to the places where people are getting their information and trying to make his case.  And I think that’s what he’ll do on the show.

Q    Robert, does the President not have any concern about the conflation of entertainment comedy and politics?  Does that — does it take away from the seriousness?

MR. GIBBS: Jon Stewart is sort of past that.

Q    It’s not just about the interview, but the weekend as well.

Q    Well, to the extent that a leading comedian is holding a political rally — no concern about that?

MR. GIBBS: Not necessarily, no.  I mean, look, we’ve had entertainers join things like Rock the Vote to help register people to vote and help get people involved.  Look, I think the President would tell you that we have a very special gift in our democracy that the people get to render their judgment and they get to elect those that will represent them in Washington.  And efforts that help get people involved in and excited in participating in that democracy on either side is a good thing.