President: Obamacare ‘Not Just a Website,’ and Despite Glitches, ‘The Product Is Good’
video

President: Obamacare ‘Not Just a Website,’ and Despite Glitches, ‘The Product Is Good’ 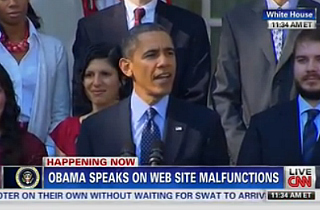 Speaking from the White House Rose Garden on Monday morning, President Obama addressed the website glitches and delays that have plagued the initial rollout of the Affordable Care Act, declaring the “product” to be good and reminding his audience that the healthcare law is “not just a website.”

Since its October 1 rollout, the online registry for the Obamacare health exchange has been beset by website glitches, long wait times, and clunky programming. “You probably heard the new website where people can apply for health insurance and browse and buy affordable plans in most states hasn’t worked as smoothly as it was supposed to work,” the president conceded. “The number of people who visited the site has been overwhelming which is aggravated some of these underlying problems.”

“Let me remind everybody that the Affordable Care Act is not just a website,” he declared. “It’s much more.”

The president touted that, outside of the website issues, there are benefits from Obamacare that he believes many do not know about — “they’re not going anywhere and they’re not dependent on a website,” he said. “In Oregon, for example, the number of uninsured people by 10% just in the last three weeks. Think about that. That’s 56,000 more Americans who now have health care. That doesn’t depend on a website.”

However, he later said, “there’s no excuse for the problems,” reminding everyone: “We’re only three weeks into a six-month period where you can buy these plans.”

Among the ways in which the president claims the administration is working to fix the glitches, he emphasized the adding of more call center operators.

“The product is good,” he reiterated multiple times throughout the speech. “We know the demand is there. People are rushing to see what is available.”

Watch a clip below, via CNN: