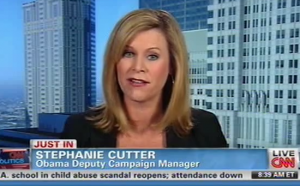 Stephanie Cutter, President Obama‘s deputy campaign manager, was a guest on Starting Point Friday morning and addressed reports that there will likely be an announcement later in the day on possible changes to the controversial birth control mandate.

“Is it possible, in fact, to make everyone happy in a compromise?” Host Soledad O’Brien asked.

“It’s already happening, Soledad,” Cutter replied. “It’s happening in 28 states. It’s happening in the state of Massachusetts, when Governor Romney was governor there. Women had access, and continue to have access, to contraception at all institutions. The exclusion there is the same exclusion that the federal requirement includes.”

O’Brien played Cutter clips of Republicans speaking out against the mandate at CPAC, then listed a group of Democratic senators who have asked President Obama to reconsider, including Tom Carper, Bill Nelson, Ben Nelson, Clare McCaskill, Joe Manchin, and Bob Casey.

“Would the President say, yeah, what he has done was a mistake, and now he’s backing away from the mistake?” O’Brien asked. “Or would you spin that a different way?”

Cutter, who likely misquoted a poll that said 98% of sexually active Catholic women have used birth control in some form, added that the President actually agrees with the Democratic senators. “He agreed when we announced this rule. That’s why we gave these institutions an additional year and a half before anything goes into place, so we can talk to them and figure out how we can find a way to meet the goal…in a way that’s respectful of everybody’s beliefs.”