President Obama’s Memorial Day Address To Soldiers: ‘America Will Be There For You’ 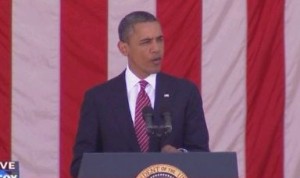 President Obama delivered his yearly Memorial Address this morning– the first, he noted, where he could say “Americans are not fighting and dying in Iraq.” Honoring many individual soldiers personally while thanking the armed forces for their services, the President promised soldiers the “clear mission and full support of a grateful nation,” and to refrain from sending troops into battle unless “absolutely necessary.”

Noting that the Iraq War as we knew it for a decade is over, and the war in Afghanistan winding down, the President detailed the stories of the first and last deaths of the Iraq War, then spoke to the parents of the fallen. “I cannot begin to fully understand your loss. As a father, I cannot begin to imagine what it’s like to hear that knock on the door and learn that your worst fears have come true,” he said, citing the decision to go to war as “the most wrenching decision that I have to make” as President. He promised he will “never do so unless it is absolutely necessary,” and offer always the “clear mission and the full support of a grateful nation.”

He then listed several individuals whose lives were lost, telling the stories of warm, dedicated soldiers lost this year. His homage did not end with the fallen however, noting that “we can meet our obligations to those who did come home” and their families, fighting “a very different but very real battle of their own.” He told the audience that the “patriots who rest beneath these hills were fighting for many things– for their families, for their flag– but above all, they were fighting for you,” promising them that “America will be there for you.” He concluded with an aspiration for the country: “we must always strive to be worthy of your sacrifice.”

The speech in full via Fox News below: