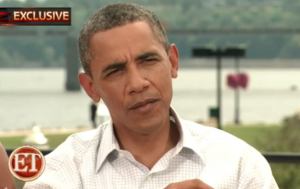 The frustration of beat reporters over a lack of access to their assigned subject caused a mini-revolt for Mitt Romney during his recent overseas trip, and it looks like a similar unrest is developing among the White House press corps. Following a long q&a drought for the press corps, President Obama‘s recent interviews with People and Entertainment Tonight seems to be all ABC News’ Jake Tapper can stands, and he can’t stands no more, prompting him to write a blog post detailing the President’s avoidance of his own beat reporters.

There has been grumbling by White House reporters for several weeks about how long it’s been since the President took questions from the press corps, and a lot of speculation as to when that drought might break, but his decision to continue snubbing the reporters who show up sat the White House every day to watch the paint dry, while granting interviews to the likes of People Magazine and Entertainment Tonight, has drawn out some of that frustration:

President Obama hasn’t formally taken questions from the White House press corps in more than two months, while on the campaign trail in Iowa yesterday he made time for reporters from People Magazine and Entertainment Tonight.

His last news conference was at the G20 in June, when he answered six questions from three reporters on the European debt crisis, the conflict in Syria, and the notion of politics stopping at the water’s edge.

The White House press corps has not formally been given the opportunity to ask questions of the president on U.S. soil since his appearance in the Briefing Room on June 8 (when he said “the private sector is doing fine.“)

The President did, however, answer one question in the Rose Garden a week after that June 8 presser, but it was one shouted by Daily Caller heckler Neil Munro. It’s difficult to say which is more galling, Munro’s outburst, or being snubbed in favor of a magazine that covers the Robert Pattinson/Kristin Stewart beat.

This is a complaint that crops up periodically, even though the President’s overall press conference frequency is on par with past presidents (and including one-on-one interviews, he far outpaces all others in availability to the press). There are a host of differences between a press conference and a regular interview, but beyond the obviously greater diversity of questions, the chief benefit to the public is that White House reporters, well-versed in the day-to-day activities of the administration, should theoretically ask better questions.

Aside from benefiting the public, though, more frequent (and less pageant-like) press conferences would be of great political benefit to the President. In an election in which the President’s campaign can’t stop reminding us how badly he will be outspent, the ability to literally make the news could be a tremendous equalizer. Despite the occasional sound bite that his opponents leap upon, President Obama is an excellent extemporaneous speaker, and a great one-liner at a press conference can be worth a Koch-load of ad buys.

Nobody’s saying President Obama shouldn’t be reaching out to consumers of pop-cultural media, but he also shouldn’t do it to the exclusion of reporters who work hard covering him every day.