President Romney = Ratings: Why A Mitt Victory Would Be Gold For MSNBC, Fox News 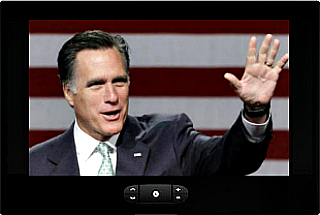 Come Election Day, MSNBC hosts from Mika to Maddow to Matthews will have the pom-poms out rooting for an Obama victory.

I know what you’re saying: “Thank you, Captain Obvious.”

But to quote the great Colonel Jessup in A Few Good Men, “Deep down in places you don’t talk about at parties…” the top folks over at 30 Rock in charge of maximizing revenue and making the network profitable are actually rooting for… Mitt Romney.

Over at Fox News, the opposite and same applies, albeit not as overtly. Election night anchors Bret Baier and Megyn Kelly will be more subdued (some call it professional) in terms of emotion displayed toward a particular candidate. But to think that both won’t be voting (and secretly pulling) for the former Massachusetts Governor is as believable as Stephanie Cutter.

For Roger Ailes and the rest of FNC management, they too believe that a Romney victory will not only be good for the economy, but for their own fiscal house as well. Imagine that…MSNBC and Fox both cheering for the GOP.

Here’s why: In the case of an Obama victory, it’ll be the same old-same old, but worse. Know this: 2nd term Presidents tend to be much less interesting, less bold than seen in first terms. The next four years will become an exercise in playing it safe and establishing a positive legacy. Nothing remotely close to the scale of the Affordable Care Act (Obamacare) will be proposed. No more $800 million-dollar stimulus packages for not-so-shovel-ready jobs…

Only Bill Clinton is the modern exception in terms of 2nd term excitement (pun intended) because of an intern the New York Post affectionately dubbed, The Portly Pepperpot and her crusty love dress.

On the GOP side, a Romney victory puts a new protagonist on stage to advocate or attack. If you’re a producer at MSNBC, or a blogger for the Daily Beast, or a reporter at POLITICO, what’s sexier to talk about?

A second Obama term that promises a small agenda and sure-footed course with a familiar face we’ve already analyzed more than Tim Tebow?

Or a first term Romney presidency that promises cuts to entitlements and budgets in an effort to bring down an unsustainable debt?

Even Sean Hannity admitted last week that his radio audience knows his attack lines on the President by heart:
“23 million Americans out of work. One in six Americans living in poverty. 47 million on food stamps,” you’ll hear 6-to-17 times per broadcast. It’s more overplayed than that “Call Me Maybe” song.

Back to MSNBC, its programming will be no different than its present coverage of the Romney campaign: 24/7 attack-journalism (if journalism can even be applied here anymore) via slicing and dicing every initiative, budget cut, and elimination of every tax loophole and deduction President Romney decides to propose.

Senate Majority Leader Harry Reid has already declared he will never work with Romney in any capacity, providing more fireworks that ultimately hurt the populace through gridlock, but make for decent television when MSNBC (Reid) and FNC (Romney) pick a side in an unwinnable street fight (while CNN looks on helplessly while still deciding on an identity).

For Fox, it loses a human piñata in Obama the same way its so-called rival lost Bush 43 to beat up on in 2008. But will Reid and Nancy Pelosi suffice as the kind of antagonists evil enough for its audience to hate, and therefore obsessively watch to see what they do next?

For the same reasons Obama is becoming as tired to attack as the average Kardashian, the answer is no. It’s like the Batman series: You can’t bring the Joker back again as the villain (even if Heath Ledger was alive)…we’ve already seen that movie, it’s all played out. Instead, you need to move on to the next bad guy/girl.

So instead of finding a (likely boring) Democrat power player to take over the role of Obama, Fox will do what it excels at infinitely better than anyone:

Thanks to conservative websites like Drudge, Breitbart, Newsbusters and The Daily Caller, FNC producers have all the juicy ammunition they need, as segments are already written for them thanks to the endless confrontational content found on said sites (the same gifts are available to MSNBC producers via left-leaning sites like Mother Jones, Daily Kos, HuffPo, Salon and Politico).

And the audience eats it up: From my experience at FNC, emails from viewers were just as passionate about media prejudice as they were about the Obama Administration. To that end, any time the Romney Administration is seen as being treated unfairly (particularly by the major networks to avoid mentioning MSNBC too often), Fox will choose that angle over a tedious elected Democrat figure every time.

Thanks to the media taking sides, the country is now more divided than ever. Consequently, for most that live in the political bubble, this election is more about seeing the losers’ reaction and making them eat crow than actually overcoming real challenges that face the country.

Ask most supporters of the President to name three things he plans to achieve if given a second term. The chance of hearing three coherent answers is about as high as finding a generator to buy within a 100-mile radius of New York City.

Ask some Republicans what motivates them when voting for Mitt Romney, and outside of the debt reduction and job creation, the number one answer is simply to beat Barack Obama (and no, not because of racism…no matter how much that malarkey is pushed).

And when it comes to Democrats and the dwindling number of independents who plan to cast their vote for the President, outlining an Obama second term agenda doesn’t involve policy plans such as more stimulus or expanded entitlements. Instead, the narrative is all about rich guy Romney and what he allegedly has planned to effectively destroy every aspect of the country.

Obama isn’t perfect, they’ll say. But the other guy? He’s a bullshitting, binder-filling, Big Bird bashing, Benghazi-exploiting bastard. The economy won’t be great under Obama, they’ll explain…but at least abortion and gay rights will be safe, and we’ll avoid slipping into another great recession.

It’s the “good-enough” argument in what is being called “a choice election.”

No matter who wins, the opposing media side will not be gracious in defeat. If Romney is the victor, you’ll see stories on voter fraud and subtle racism as the reasons why from Ed Schultz to Nate Silver to Slate Magazine. There will be no honeymoon: Romney and Ryan will be as embraced as Bush 43 was in 2000.

Same goes for the post-Obama win landscape: November 7th will be flush with (drumroll) voter fraud allegations, calls for hearings on Benghazi and the impending doom of going off a fiscal cliff on January 1. And if this ends up being a split election (Romney wins popular but loses electoral)…it’s be the worst gridlock seen since your average gas line in Jersey.

Most of the folks we see on Fox News want Hope and Change 2.0, Romney-style.

But in the irony of ironies, the honchos at both networks, the ones tasked with making money, are equally pulling for the challenger…
— —
>> Follow Joe Concha (@ConchSports) on Twitter