How Will History View the Obamas As Parents? 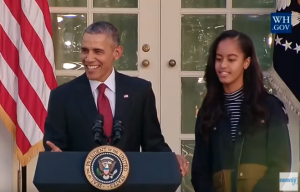 Whatever you may think of the President and First Lady, they have been outstanding parents, putting the lives of their children above politics. Recently announced plans for their daughter Malia are a good example.

The word is that Malia will have a year off before beginning her studies at Harvard in 2017. This will coincide with the post presidency of the President and First Lady and give the family time to adjust to a new life.

Presidents are notoriously bad parents.  Too severe or too indulgent.  Abraham Lincoln was estranged from his son and the White House servants were on edge when he visited from Harvard. Grant was typical of many presidents who indulge their children. It may have come from guilt for being away so much.

The Obama’s by contrast offer discipline and structure in the lives of their girls. Limiting the Internet and television, for example, while not hesitating to defy political theater by acting in their daughters’ best interest.

Liberal Democrats are champions of public education and for that reason, Jimmy Carter sent his daughter to public school.  Critics said Obama would be a hypocrite if he didn’t do the same but he and Michelle did what they thought was best for their girls and took the political heat, sending them to private schools.

They took them on foreign trips when it would make a difference and left them home when academic needs demanded it.

In contrast to the infidelities of many modern White House families, the Obama’s have given their daughters an example of a good marriage. In the long run it may be their greatest gift to the girls.

The inclusion of the grandmother in White House life was very important. I have interviewed 19 presidential children and almost all agree that they needed someone else – who was family – to help them but they didn’t get it.

When Mailia Obama enters Harvard in the fall of 2017, she will join a long list of presidential children who followed the same path.

John Quincy Adams, the sixth president, followed in his father’s footsteps when attending the University but he took a circuitous route to get there. Homeschooled at a young age, he was taken to Europe with his father, who was representing the American colonies during the Revolutionary War. By the time he got to Harvard he could speak five languages. He graduated second in his class in 1787.

The sons of President John Quincy Adams tried their best to keep up. George Washington Adams needed special tutoring to get into Harvard. He would die in his twenties from what most historians believe to be a suicide.

His younger brother, John Adams II, became the next deadly focus of the family’s desire for performance. When Harvard invited President John Quincy Adams to speak at his son’s graduation he said he would not do so unless his son improved his standing.  The young Mr. Adams was 45th in his class.

The President refused to allow his son to come home to the family for a White House Christmas. Young Mr. Adams focused on his studies and improved to 24th whereupon his father announced he would not attend graduation anyway.

A few weeks later, John Adams II was seen drunk, racing across Harvard Yard in the nude. He was expelled. He would die of alcoholism in his thirties. His mother First Lady Louisa Adams would write, “Another child sacrificed on the altar of politics.”

In later years presidents tried to soften the blow of excessive expectations. Theodore Roosevelt once wrote his boys, saying that “each of my sons is doing or has done better than I was doing and had done at his age.”

But no matter how well intentioned he could not resist. “There is not leeway for the smallest shortcoming on your part,” he wrote Ted, Jr. before his exams at Harvard.

Franklin and Eleanor Roosevelt would not win any awards for parenting. And their five children would pay the price for it. The five children of FDR would have 19 marriages between them.

James Roosevelt, the first son had a Harvard career described by the Los Angeles Times as “unbrilliant.” (August 13, 1938.)  While Doris Kerns Goodwin thought it was “brilliant.” (No Ordinary Time, p. 170).

James was caught up in many scandals but also served for six terms in the U.S. Congress. Meanwhile, his brother Elliot flunked the Harvard entrance exam.

And finally there is George W. Bush. Who not only followed his father by graduating from Yale but picked up an MBA at Harvard as well.

The Obama’s represent a new time and a new family in the White House. And Malia represents the first daughter of a president to take on Harvard. We will all be wishing her well.

Doug Wead is a presidential historian who served as senior adviser to the Ron Paul presidential campaign in 2012. He is also author of All the President’s Children.