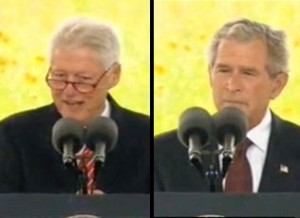 In a heartfelt tribute to the victims of Flight 93, Presidents George W. Bush and Bill Clinton visited the field in Shanksville, PA, where passengers on that flight managed to get the plane to land, evading its ultimate destination. Both Presidents gave their perspectives in solemn addresses, President Bush reminded the audience that the event was a reminder for our nation to “serve the cause of freedom,” while President Clinton concluded that the heroes of that flight reminded us that “humanity is what matters most.”

President Bush reminded the audience of the intensity of the event, and the depth of our loss: “the most American lives lost on American soil since the Battle of Antietam.” While to many presently, the day may “feel like a part of a different era,” President Bush suggested that for those present, and for those who lost loved ones, “that day will never feel like history.”

“One of the lessons of September 11th is that evil is real, and so is courage,” President Bush concluded, “that love and sacrifice can triumph over evil and hatred.” It was a message also carried through by the previous speaker, President Clinton, who compared the fallen at Flight 93 with the Spartans defeated at Thermopylae and the soldiers at the Alamo– all of whom knew were going to die, and went through with their valiant efforts anyway. The key difference for President Clinton was that, “at the Alamo and Thermopylae, they were soldiers,” not civilians who happened to be in the wrong place at the wrong time. “I hope and pray to God that people still remember this,” he concluded, adding that, along with Speaker John Boehner, he would be helping put up the rest of the funding necessary for the memorial.