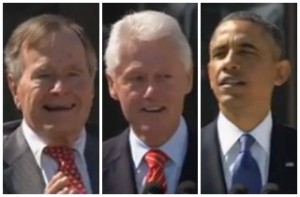 All five of the living presidents of the United States gathered together in Dallas, Texas Thursday to help George W. Bush dedicate his presidential library. The speeches given by President Barack Obama and former presidents Jimmy Carter, George H. W. Bush and Bill Clinton heaped praise on the younger Bush, along with some gentle ribbing.

George W. Bush’s father, Bush 41, perhaps got the loudest applause, briefly rising from his wheelchair to acknowledge the standing ovation. After speaking for less than a minute and thanking everyone for coming to help his “oldest son” dedicate the library, he drew laughs by leaning over to Bush 43 and asking, “too long?”

Up next, former President Clinton rose to speak, opening with a joke. This library, he said, is the “latest, grandest example of the eternal struggle of former presidents to rewrite history.” Going on to speak about his personal relationship with Bush, he referred to himself as the “black sheep son” of the family. “There is one other connection I have that I think is largely unknown, which is that a couple of times a year in his second term George Bush would call me just to talk politics and a chill went up and down my spine when Laura said all their records were digitized,” he continued. “Dear God, I hope there’s no record of those conversations in this vast and beautiful building.”

On a more serious note, Clinton joined President Carter in thanking Bush for establishing the PEPFAR program to help those suffering from HIV in Africa. He also spoke about how much he values the times when they disagree. “I like President Bush. We do a lot of speeches together and I like it when we have disagreements,” Clinton said. “He is disarmingly direct.”

Finally, President Obama took the podium, calling the event a “Texas-sized party that’s “worthy of what we’re here to do today.” Like his predecessors, Obama had plenty of laudatory things to say about the man he succeeded. “To know the man is to like the man because he is comfortable in his own skin,” Obama said. “He knows who he is. He doesn’t put on any pretenses. He takes his job seriously but not himself too seriously. He is a good man.”

Turning to one of the central policy issues of his second term, Obama held up Bush as a model for how to achieve bipartisan support for immigration. “We remember his commitment to reaching across the aisle,” Obama said. “We have to repair a broken immigration system, and this progress is only possible when we do it together. Now seven years ago, President Bush restarted an important conversation by speaking with the American people about our history as a nation of laws and a nation of immigrants. And even though comprehensive immigration reform has taken a little longer than any of us expected, I am hopeful that this year, with the help of Speaker Boehner and some of the senators and members of Congress who are here today, that we bring it home for our families, and our economy, and our security, and for this incredible country that we love. And if we do that, it will be in large part thanks to all the hard work of President George W. Bush.”

Watch all three speeches below, via CNN: