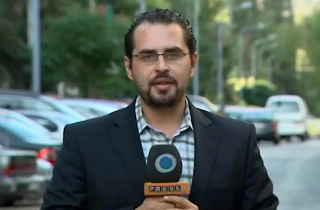 Maya Nasser, a correspondent for Iran’s Press TV network, was reportedly killed on Wednesday by a sniper while delivering a report on-air in Damascus, Syria.

According to Al Jazeera, Nasser was shot in the neck by snipers while he and the network’s Damascus Bureau Chief Hossein Mortada were covering the large explosions at the Syrian army’s headquarters in Umayyad Square. Mortada was also shot in the leg, but it wasn’t fatal.

A statement posted to Nasser’s Facebook page said that “armed terrorists” drove up in vehicles and additional snipers shot from the rooftops of nearby buildings.

Press TV condemned the anti-journalist violence, with news director Hamid Reza Emadi declaring that other Middle East nations like Turkey, Saudi Arabia and Qatar were “responsible for the killing of Maya” because they “provide militants weapons to kill civilians, military personnel and journalists.”

“Press TV will be pursuing the matter of the murder of Maya and will not let those who killed our correspondent feel like they can kill media people and get away with it,” he added.

Maya was a Syria-based correspondent for the Iranian television network who described himself as “a normal citizen” who “[doesn’t] have [a] problem with anyone as long as they can preserve all rights based on citizenship.” He was not a known critic of the Assad regime, and Al Jazeera reports that his writings on Twitter and Facebook were seemingly “sympathetic to the government and did not take the positive view of rebels held by those who back the uprising.”