Pro Athlete Points Out ‘Racist’ 13-Year-Old Spectator, Has Her Thrown Out Of Stadium
video

Pro Athlete Points Out ‘Racist’ 13-Year-Old Spectator, Has Her Thrown Out Of Stadium 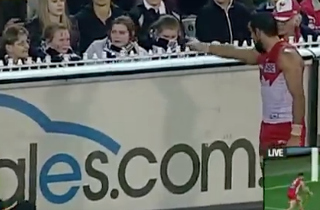 An Australian rules footballer has received praise for his stoic but stern reaction to a heckler who, at this past weekend’s match, shouted out a “racist” remark at him as his team was about to win the match.

Sydney Swans star forward Adam Goodes is an Aboriginal Australian. As the final moments of a game against rival Collingwood dwindled down, he was called an “ape” by a young female spectator as he ran past her seated in the front row. As soon as he heard the epithet, Goodes turned around, pointed her out to security, and had her escorted from the Melbourne arena.

The incident was particularly discouraging for many as the weekend was set aside to celebrate the contribution of indigenous athletes like Goodes to the Aussie rules version of football. Some officials lamented that the 13-year-old girl’s words harkened back to the “bad, old days” of the sport, 20 years ago, when another aboriginal athlete felt so degraded by racial epithets that he stripped off his shirt and declared his pride in being black to an entire stadium crowd.

Goodes was especially stunned by this incident given the heckler’s young age. After the incident, she was reportedly in touch with the athlete, apologizing for her actions. Goodes will not seek legal action (that’s apparently something Aussies can do when the butt of racial slurs?) and instead recommended she undergo an education program.

The unidentified girl told Channel 10 news she was sorry for her actions. “I didn’t mean it in a racist way and I’m sorry to the club and the AFL,” she said.

Watch the report below, via Sky News: